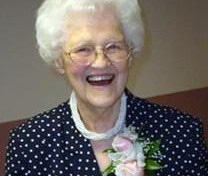 DES MOINES, Iowa—Gladys Jo Gray, former dean of women at Baptist Bible College and Seminary, died Sept. 28. She was 93. Gladys attended Moody Bible Institute and began her career in 1945 at Farm Bureau as a junior underwriter. While working at National Travelers, she became one of the first female certified life underwriters. Gladys was a faithful member of Grandview Park Baptist Church and later Slater Baptist Church. Her pastor at Grandview, Carl Elgena, eventually became  vice president of Baptist Bible Seminary when it was located in Johnson City, N.Y. He asked Gladys to be assistant dean of women, and she accepted, later becoming the dean of women. Returning home to Des Moines in 1965, she was supervisor to the life underwriters at Central Life Insurance Company until her retirement in 1976. Gladys served on her church’s Ladies’ Missionary Fellowship committee and was a lifelong member of the Christian Business Women’s Association, serving a term as president. She was preceded in death by her husband, Dr. Harry B. Gray, a professor and dean of education at Faith Baptist Bible College, Ankeny, Iowa; a sister, Lucy Brinkerhoff; and three brothers, Stanley, John, and Marion Charlton. Survivors include her stepchildren, Paul Gray, Jenetta Gain, and Melody Cato; 14 grandchildren; and eight great-grandchildren. In 2012 the Alumni Association of Faith Baptist Bible College recognized Gladys as an honorary alumna of Faith. Director Gene Matlock said at that time, “Gladys Gray became a faithful partner to Dr. Gray, a loving mother to his three children (all of whom call her Mother), and a dedicated volunteer worker at Faith. If Mrs. Gray committed to volunteering on a certain day here at Faith, she was there as promised. She came with a smile and on time, ready to work on the project—usually a mailing that needed to be stuffed, sealed, and sorted. Mrs. Gray’s humor and happy demeanor helped make the time fly.”