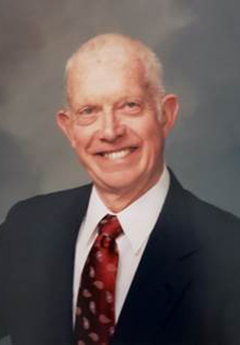 Dr. Smith was a physician for four decades. He started his career in family practice in Lowell, Indiana; worked in the emergency department of Franciscan Health in Lafayette and served as chief of staff for his local hospital; and finished his career at Indiana University Health Arnett Urgent Care in Lafayette. He retired in 1996.

Along with his career in medicine, Dr. Smith was a leader in Biblical counseling. In 1977 he cofounded Faith Biblical Counseling Ministries at Faith Church in Lafayette with Bill Goode, then pastor of the church.

“Pastor Goode and Dr. Smith had an interest in training others, knowing that the need for this kind of ministry was far too great for [Goode and Smith] to meet alone,” Faith Church says. “Thus, a conference began in the hopes of training others to use the Scriptures to point people to the life-changing power of Jesus.”

Mike Hess, GARBC national representative, attended a national Biblical Counseling Training Conference “many moons ago,” back when he was a young pastor.

“I was privileged to attend track 1 of Biblical counseling training at Faith Church in Lafayette, Indiana, with my wife,” he says.

“I’ll never forget the workshop taught by Dr. Bob Smith on the ‘Four Rules of Communication.’ In this workshop, with hundreds more of God’s choice servants, I was blessed to hear from a humble medical doctor who stewarded his membership in his local church to faithfully serve the greater Body of Christ.”

A few years after that conference, Dr. Smith spoke at the church where Hess was pastor. Visiting a men’s retreat and a Sunday morning worship service, Smith spoke on how to Biblically submit to imperfect God-ordained leadership. At the time, Smith was recovering from a broken hip.

“It was amazing to me to see this recently injured man with a broken hip traveling to minister to God’s people—joyfully, humbly, and faithfully,” Hess says. That selfless quality “continues to have an enormous impact on me to this day.”

After cofounding Faith Biblical Counseling Ministries, Dr. Smith remained active in its ministry, serving as administrator, counseling people, speaking in conferences, and training the next generation of counselors.

In addition to his ministry at Faith Church, Dr. Smith also served on the academy and board of the Association of Certified Biblical Counselors, traveling extensively and speaking on behalf of the organization. He was also an adjunct faculty member of The Master’s University, where he established a Biblical counseling major in the Bible department.

“Dr. Smith’s life is a testimony of stewarding your life well for God’s glory by humbly using your gifts to help equip believers to serve well in their local churches,” Hess says. “Countless numbers of pastors and other Christians within the GARBC have been greatly impacted by his teaching and writing on Biblical counseling. His commitment to the Scriptures was unwavering. His love for his wife and family modeled Jesus’ love for the church.”

Steve Viars, pastor of Faith Church since 1987, says that “Faith Church as a congregation owes a tremendous debt of gratitude to the Lord for blessing us with this unique couple.”

“Doc loved the Lord and His Word and was both joyful and fearless in his defense of the ‘faith that was once and for all delivered unto the saints’ [Jude 1:3],” Viars says.

Dr. Smith’s “service to his local church was marked by humility, and his heart’s desire was to sincerely glorify his Savior,” Hess says. Dr. Smith’s life “is a reminder of the influence and impact of humble faithfulness.”

Mike and special guest Knute Larson discuss pastoral mentoring, church ministry, and the role of the Holy Spirit in the life of the ...more

The Power and Value of Networks

In an association rooted in autonomy and independence, it’s time to return to a more Biblical model of ...more

Glow in VBS: Use Black Lights

Start with two to five workers. One of the first things you will want to do is cast your vision to those working with you. ...more