ALBANY, Ore.—David F. Miller, former president of Corban University and GARBC pastor, passed away after struggling with lymphoma on Dec. 7. He was 72. “He has graduated to Heaven after his 7-year battle with cancer,” says his wife, Koyce. “Through it all, God has used this time for His glory and to see new believers [...] 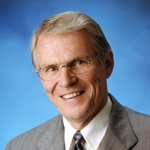 ALBANY, Ore.—David F. Miller, former president of Corban University and GARBC pastor, passed away after struggling with lymphoma on Dec. 7. He was 72. “He has graduated to Heaven after his 7-year battle with cancer,” says his wife, Koyce. “Through it all, God has used this time for His glory and to see new believers come to know the Savior.” Miller was born in Cleveland, Ohio, in 1940. His parents, Thomas and Mildred Miller, moved the family to Wenatchee, Wash., to operate a local hardware store in 1949. But Thomas Miller became active in planting East Wenatchee First Baptist Church, eventually leaving the hardware business to become the church’s pastor. David Miller, a charter member of the church, graduated from high school in 1959 and enrolled in Western Baptist Bible College, then located in El Cerrito, Calif. He married Koyce Morgan and entered San Francisco Conservative Baptist Theological Seminary, graduating in 1966 with an MDiv and in 1968 with a ThM. While in seminary he began teaching part-time at WBBC. When the college moved to its Salem campus in 1969, Miller was given a sabbatical to work on his doctorate at Grace Seminary, Winona Lake, Ind., where he earned a ThD. Returning to WBBC, Miller taught Bible courses, upper division theology, and also served as chair for the division of Biblical studies. When they first moved to Salem, the Millers were members of Bethany Baptist Church. In 1974 they were commissioned to plant Valley Baptist Church in Perrydale, Ore., meeting in a church building they were able to purchase for one dollar. While continuing on WBBC’s faculty, Miller served as the pastor of Valley Baptist for 17 years. He and Koyce often spent their summers traveling and teaching on various mission fields. He resigned as pastor when he became president of what was then known as Western Baptist College. He retired as president in 1999 (the college changed its name to Corban in 2005). “At a genuinely Christian college, the Bible is integrated into every discipline,” Miller wrote in a 1992 Baptist Bulletin article. “The whole curriculum is ‘baptized’ in the truth of Biblical Christianity.” He suggested that churches set aside 30 percent of their outreach budget for Christian college scholarships. During Miller’s presidency, Corban added new residence halls, student apartments, and an athletic complex, and developed a computer network. He led the college to develop a new program in adult studies that became popular with community students in Salem and across the country. He is survived by his wife, Koyce; two sons, Scott Miller and Mike Miller; and five grandchildren.
Posted in With the Lord on December 11, 2012.