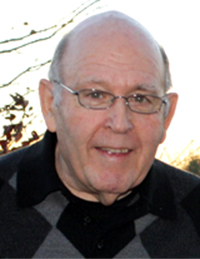 After graduating from high school in 1951 and desiring to go into ministry, Reese attended St. Paul Bible College (now Moody Bible Institute). But when he ran out of money to attend school, he went back home to Des Moines and enlisted in the Navy in 1952. He completed boot camp in San Diego, returned home, and met Shirley Powell, whom he married on Oct. 28, 1954. Continuing his career with the Navy, Reese was stationed in Alaska and California for the next two years.

With his Navy career behind him and dreams of ministry ahead of him, Reese returned to school, graduating from Faith Baptist Bible College in 1969. He went on to pastor churches in Belmond, Webster City, Grinnell, and Knoxville, Iowa, and Enid, Oklahoma. Throughout their ministry together, Damon and Shirley Reese developed close friendships with many people and cherished those memories.

Following his retirement, Damon was a member of Saylorville Church in Des Moines for 16 years, where he was a deacon and head usher and led prayer meetings on Wednesday nights.

He is survived by his children, Mike, Jim, Dan, and Cheryl Ouellette; eight grandchildren; and three great-grandchildren.