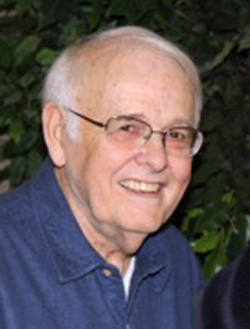 Byron attended Northwestern Schools in Minneapolis, where he met Janice Murk. They married in 1950 and were blessed with four children. While living in Minneapolis, Byron worked for the Fuller Brush Co. and Dayton Rogers Manufacturers. After moving to Kalamazoo, Mich., he started his own manufacturer’s rep business and ministered with the youth at Bethel Baptist Church.

At age 40, Byron answered the Lord’s call to ministry and was ordained to be a home missionary, establishing ministries in Battle Creek and Ludington, Mich. After moving to California, he had ministries in Riverside, Moreno Valley, Sacramento, Sonoma, Campbell, and Foresthill under Western Baptist Home Missions.

After 58 years of marriage, his wife, Janice, went to be with the Lord. In late 2009, Byron married Judy Golike-Andrew and continued to minister in Foresthill, moving to Santa Maria in 2010. For the final years of his life he ministered in Los Alamos and Los Olivos.

MAKE DISCIPLESHIP A PRIORITY Christ’s commission is to make disciples of all nations. Make discipleship a priority in your church with helpful resources from RBP. Strong ...more

Book Review: The Making of a Battle Royal