TOLEDO---Ten years of planning culminated in the opening of a new children’s wing at Emmanuel Baptist Church, a $1.6 million project that expands and consolidates its ministry from the nursery through fifth grade. 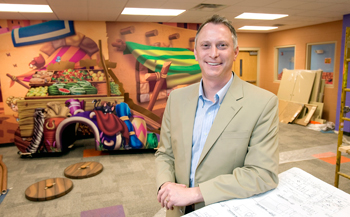 TOLEDO—Ten years of planning culminated in the opening of a new children’s wing at Emmanuel Baptist Church, a $1.6 million project that expands and consolidates its ministry from the nursery through fifth grade. On Nov. 24 the church celebrated with tours, a dedication service, and the release of a new book written by Pastor Duke Crawford.

The previous children’s wing was built in the 1960s and was the first home to the church’s Christian school. The church intended to have a vibrant children’s ministry, but its wing “was a narrow, dark, scary hallway—and that’s where we were sending the kids,” says Crawford. “What we have now will definitely change the learning environment.”

Emmanuel Baptist began raising funds about 10 years ago; the congregation’s offerings and special gifts were supplanted by three generous estates from deceased church members. Soon after Crawford became pastor in 2009, the church hired Thomas DuBose & Associates as architects and The Dotson Company of Whitehouse, Ohio, as general contractors.

The finished project vividly demonstrates what can result when a church determines to upgrade its aging facilities. Part of the original wing was left intact, then expanded to include three nurseries, classroom space through fifth grade, and a chapel with space for 75 children. The church also installed new security technology and designed each room so children would not share bathrooms with adults. Rooms have colorful tiles on the floor for messy activities, carpeted areas, and wall graphics designed by Wacky World Studios.

“We think the new space is very inviting, colorful, creative,” Crawford says. “So much more enjoyable for the children.” 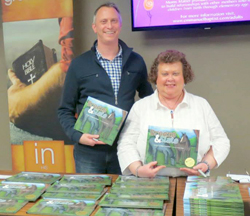 To celebrate the opening of the new wing, Pastor Crawford worked with Regular Baptist Press to custom print 500 copies of a new book, hard bound and printed in four colors.

“I came up with the story in 1999 on my way to India,” says Crawford, who had been invited to speak at Northeast India Baptist Bible College and Seminary.

“One of the things they wanted me to do while I was there was to go to these English schools to talk to the children. Most of the kids were not Christians. I wanted to illustrate how Jesus is the best master and Lord of our lives.”

Growing up in the farming community of Greene, Iowa, Crawford had a passing familiarity with horses. But the real spark for his book was a television documentary about wild mustangs. “There is a dominant stallion in each herd who calls all of the shots,” he recalls. His plot developed as he told the story several times in India, a story of Breeze and Slate and their decision to follow the right leader.

Crawford told the children that Jesus Christ is the best master because of the life change He brings. “He does break your spirit, but that’s a good thing. He makes us useful,” Crawford says.

The book was illustrated by Sandy Chipka, a member of Emmanuel Baptist Church.