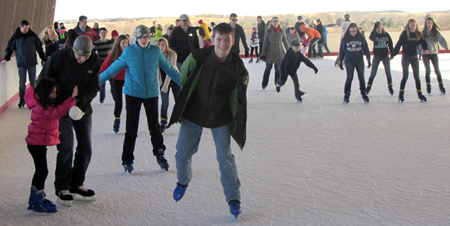 Every year teens are welcomed to the church with donuts, hot chocolate, and fellowship, then they head outdoors—snow or no snow—to play games.

This year’s event reflected the Winter Olympic Games, so it included bobsledding—two teens pulling a third on a tarp—and a biathlon in which kids “skied” to a target, then tried to hit the target with a ball. Another challenge was for groups to transform their leader into a snowflake using toilet paper.

After playing games, everyone went inside the church to hear from speaker Austin DeWitt of Grace Baptist Church in Omaha. And following a taco lunch, they enjoyed playing on an indoor playground, ice skating, and playing basketball at Mahoney State Park.