Still Serving As We Remember

FORT BRAGG, N.C.---Eleven years ago Americans watched in horror and disbelief as airplanes crashed into the World Trade Center, the Pentagon, and a field in Shanksville, Pa., thrusting us into a war we continue to fight today. On this Patriot Day we take time to remember the men and women who have committed their lives to protect our nation. 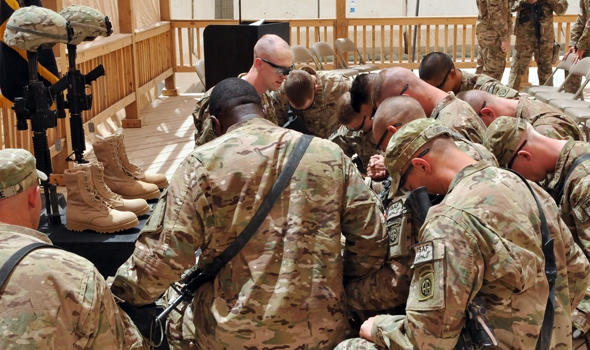 FORT BRAGG, N.C.—Eleven years ago Americans watched in horror and disbelief as airplanes crashed into the World Trade Center, the Pentagon, and a field in Shanksville, Pa., thrusting us into a war we continue to fight today. On this Patriot Day we take time to remember the men and women who have committed their lives to protect our nation, many on the front lines of the battles, some from undercover positions or in the shadows, still others in the arenas of fire, police, and first responders. To a large extent, their success has allowed many Americans to become forgetful, casual, indifferent toward their sacrifices, instead of profoundly grateful. Today we want to remember and honor those who have served in all the avenues of service that have protected and provided our nation with freedom.

Ryan Schildroth sensed early in life that God was calling him into ministry, specifically as a chaplain in the United States Army. During the years since 9/11, he has completed his education; married his sweetheart, Rachel; been ordained; completed his required years of ministry experience necessary for active duty; saw the birth of his daughter, Hannah; and finalized his endorsement with Regular Baptist Chaplaincy Ministries and appointment as a chaplain in the United States Army. Chaplain Schildroth and his family reported to Fort Bragg in North Carolina for their first active duty assignment last year, and shortly afterward he deployed to Afghanistan with his unit.

Recently two members of his unit gave their lives for our freedom. Pictured here is Chaplain Schildroth praying with the soldiers of his unit who gathered to remember their fallen comrades. The agony of war is very real to them. The memorial ceremony has concluded. The mourners have begun to disperse. Before these members of the unit go back to their duty stations, they kneel as friends and fellow soldiers and share one more prayer. These soldiers, and their families, understand well the high cost of freedom.

Today Chaplain Schildroth continues to serve in Afghanistan with the anticipation of a soon reunion with his family as the days of deployment draw closer to an end. These have been fruitful days, as he has been able to minister not only to our troops but also to civilian contractors from a variety of nations. He has been conducting weekly Bible studies, amazed at how God has brought people from around the world to meet in a land that is foreign to all of them and hear the gospel and study the Word of God together. This is a blessing of war that is often overlooked. God in His unique way enables people from various countries to meet, due to terrible reasons, and hear the truth of freedom from sin through the finished work of Jesus Christ at Calvary. These times are some of the encouragements of deployment.

Thank you, Chaplain Schildroth, for being there and ministering on behalf of God and country!

Next post Resolution: United States Ambassador to the Vatican