Thursday: Seeking to Serve Others

Thursday's wrap-up from the 2010 GARBC Conference in Schaumburg, Ill. 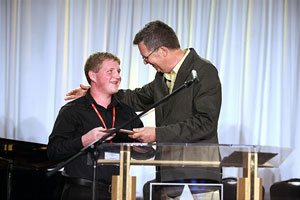 SCHAUMBURG, Ill.—Josh Brown, a member of Faith Baptist Church, Winter Haven, Fla., has been awarded the 2010 GARBC Student Service Award, part of the activities on the last full day of the GARBC Conference.

John Greening presented the award to Josh during the evening service, noting his many church ministries, including serving as his church’s VBS director.

Josh was nominated for the honor by Stephen Simpson, Josh’s friend and staff supervisor at Faith Baptist.

“I have had so many people come to me, expressing appreciation for Dr. Davey,” John Greening said as he introduced the sermon. “He’s not the person who steps into the pulpit and says, ‘Look at me, look at me!’ He says, ‘Look at God!’ ”

“Jacob Farrell has prayed for me every day since he was three years old,” says Chaplain Murdoch. “His parents used to complain that he’d pray for me and then forget to pray for the food!”

Murdoch, the GARBC chaplaincy endorser for the past 13 years, kept track of Jacob and had an opportunity to return the favor Thursday. Jacob played his trumpet in the Talents For Christ competition, and was then invited to play for the prelude of the Thursday evening service of the 2010 GARBC Conference.

“Today, I prayed for him!” Murdoch said, happily explaining how he and Jacob met for prayer before the service.

Earlier in the day, Murdoch had reported on several aspects of the chaplaincy, introducing each chaplain in attendance and giving a review of each kind of chaplaincy ministry. In addition to military chaplains, Murdoch said the chaplaincy can also include hospitals, prisons, corporations, police and fire, and different forms of lay ministry.

Bernie Augsburger, state representative for the Illinois-Missouri Association of Regular Baptist Churches, read a resolution drafted by Chaplain Murdoch with the assistance of several other chaplains. Messengers then discussed and approved the “Resolution on the Open Practice of Homosexuality in the Military,” a response to proposed legislation that would revoke the military’s “Don’t ask, don’t tell” policy. The resolution can be printed from GARBCConference.org.

Chaplain Murdoch ended his summary by addressing the gathered guests: “It’s an honor to serve you” as the uniformed chaplains exited to a standing ovation.

Mike Stallard, dean of Baptist Bible Seminary (Clarks Summit, Pa.), preached a sermon from Daniel 9 on “The Prophecy of the Seventy Weeks.”

Teens spent most of the day rehearsing and then competing in the annual Talents For Christ competition. Read more in “TFC: One Goal.”

In the afternoon, about 50 former members of Belden Baptist Church held a reunion at the GARBC Resource Center, organized by Donna Williams, wife of retired pastor Roger Williams.

On the evening of May 1, churches of the Hebron Association of Regular Baptist Churches gathered at First Baptist Church for their annual ...more

The GARBC announces the resignation of David Gunn as director of Regular Baptist Press. David has accepted an invitation from Baptist Bible Seminary (Clarks Summit, ...more

Church workers throughout the Northeast Fellowship gained ministry skills and inspiration at Serve Boldly, the fellowship's annual conference to train those who serve in church ...more