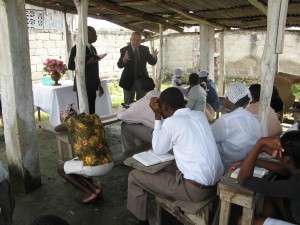 SCHAUMBURG, Ill.—Chris Hindal, director of GARBC International Ministries, returned from a 10-day trip to northern Haiti on Monday, April 26. The first weekend, he visited churches in Cap Haitian, the second largest city in Haiti. These churches are affiliated with Pastor Jocelyn Dorcin, GARBC Haitian pastor of Jehovah Chamma Baptist Church in Greenacres, Fla. One church-start in Cap Haitian meets under trees, but the members want to purchase land and build. Other churches meet in poorly constructed, tin-roofed pole buildings, while others are using rented facilities. Chris spoke in three churches on Sunday morning into early afternoon. In each of these ministries, the pastors receive very little if anything from their congregations, as few of the congregants are employed.

On Monday Chris traveled about two hours to Saint Raphael. This part of Haiti experienced the earthquake, but did not suffer structural damage or loss of life. People there, however, have become hosts to several Haitian families and orphaned children migrating from Port-au-Prince. Tim and Rose Ann Bower, missionaries with Open Door Baptist Missions, faithfully minister in this Devil-infested land. God is using the Bowers to train pastors who are church planters, oversee a Christian school, and copastor Maranatha Baptist Church. At Maranatha Baptist, Chris conducted a weeklong revival campaign and spoke at its annual Harvest Sunday. By God’s amazing grace, 40 people professed faith in Jesus Christ that week. Ministering alongside the Bowers is the Peart family. Harry Peart is the administrator of three Christian schools.

Though just a three-hour flight from Fort Lauderdale, Fla., northern Haiti is as much a third world culture as any place throughout the globe. These missionaries are heroes, and God will reward them according to their sacrifices.