DECATUR, Ill.—Riverside Baptist Church held a “Rededication Sunday” to consecrate their newly remodeled church sanctuary and dedicate themselves to sharing the gospel. 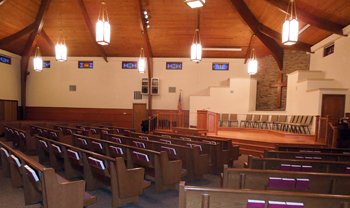 DECATUR, Ill.—Riverside Baptist Church held a “Rededication Sunday” to consecrate their newly remodeled church sanctuary and, as Pastor John A. Norris says, to dedicate “ourselves and our church facilities for the purpose of bringing glory to God, living and proclaiming God’s truth, and sharing the gospel and blessing our community.”

Riverside Baptist began 105 years ago, started by people burdened for a gospel-preaching church in the southeast, or “river side,” of Decatur. Riverside Baptist was one of the earliest churches to become a part of the GARBC fellowship, establishing official association in 1935. 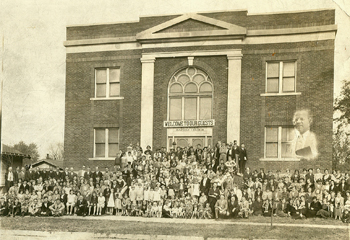 The church has had four sanctuaries over the years. “The first was a small meeting place built on a lot donated by Mrs. B. F. Stanley at the corner of Cleveland Avenue and Jasper (then called Traver Street). The next two sanctuaries were built at the same location and served as places of worship for the congregation from 1925 to 1980,” says Pastor Norris. The congregation moved to its present facilities on West Mound Road in 1980. Pastor Norris says, “Much of the work was accomplished by volunteer members of the congregation. Men and women, adults and adolescents, doctors, farmers, accountants, factory workers, and construction workers all worked side by side at every stage of the construction in service to Christ.” But that was 33 years ago, and the building needs updating.

The trustees formulated a remodeling plan to take place over a five- to seven-year span, determining that the sanctuary remodel needed to come first. The remodeling began in May and was completed within 34 days—in time for the church’s 105th anniversary on June 23.

During the remodel, the congregation worshiped first in a park pavilion, enjoying a barbecue meal afterward; then, for the following three Sundays, in the church’s downstairs gymnasium. “We actually enjoyed worshiping in the closer quarters of the gym and had fewer sound problems than anticipated,” says Pastor Norris.

The evening of Rededication Sunday featured an old-fashioned hymn sing and ice cream social. The song service was led by Riverside Baptist Church attender Dr. Brad Holmes, a Millikin University professor of choral music who is nationally known for his concert choir instruction and direction. Pastor Norris says, “Dr. Holmes is an authority on Colonial American hymn singing, and he led our congregation—seated in a square pattern—in the singing of those classic hymns in the style of that period.”

Rededication Sunday got its name from the church’s desire to renew their former dedication. Pastor Norris says, “We felt that the church had truly dedicated herself to the glory of God when the present facility was dedicated on April 13, 1980. But we also wanted to use the occasion to renew that dedication. Overall, the remodeling was a step of faith by our congregation, and an encouraging indication of God’s continued guidance and blessing.”