SCHAUMBURG, Ill.—Jeannie Vogel, author of two Regular Baptist Press books, has won the Writer of the Year Award from Write to Publish. 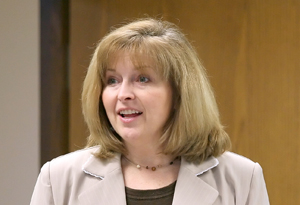 SCHAUMBURG, Ill.—Jeannie Vogel, author of two Regular Baptist Press books, has won the Writer of the Year Award from Write to Publish for her 2010 women’s Bible study Accepting the Challenge: Leadership Lessons from the Life of Moses.

For almost 40 years, Write-to-Publish has been holding conferences in the Chicago area to train writers and connect them with other writers and editors. The 2011 Writer of the Year Award was presented to Jeannie as a conference alumnus for the best work published since 2008.

Although a published author already, Jeannie attended both the 2009 and 2010 writers’ conferences. Joan Alexander, an editor at RBP and a member of the Write to Publish faculty/staff, told Jeannie about the conference. Jeannie says, “There are a lot of things you can learn at that conference. They have a really good staff of people helping you to write. And I went to make some contacts with publishers about writing for magazines.” Jeannie is now writing freelance for several periodicals.

Jeannie says that as she looked at women’s ministries, there were two ends of the spectrum without a lot of material: evangelism and leadership training. Her passion for unsaved women led her to write Meeting Jesus in the Gospel of John, an evangelistic Bible study published by RBP. Jeannie is currently working on another evangelistic Bible study packaged with outreach ideas and is in talks with a publisher.

Then, as Jeannie began to train women to do things like evangelistic Bible studies, she realized that “when you get into leadership positions, there are other things that come up—oftentimes, working with people can be discouraging. You see a different side of Christianity when you are a leader. So I thought I’d really like to have some material for that group—for pastors’ wives, women’s ministry directors, or the people who have taught Sunday School for a long time.”

Having studied Moses for herself, Jeannie realized that “what he went through is what every leader will go through. When I thought of these principles and RBP started talking about publishing something in this category (for leaders), that was the first thing that came to my mind.”

Accepting the Challenge is for women who want an in-depth study using a six-day format. Jeannie says, “I really am trying to push people toward doing their own personal Bible study, not just listening to an author. So the Day 1 section is intentionally a mini inductive Bible study that I’m hoping women will do on their own. Again, my whole point in the Bible study is that leaders have to be really tuned-in to God. You can be a great leader, but if all you’re doing is following other Bible study leaders, you’re not really being fed personally.”

In presenting the award, Write to Publish Director Lin Johnson said, “This year’s winner excelled in the areas of research, organization of material, writing skill, and depth of spiritual takeaway.” She continued, “Steeped in Scripture, this course also helps women set up the daily discipline of digging out truth from God’s Word and memorizing it. Jeannie Vogel covers such topics as knowing God intimately and listening to Him, trusting God to use our weaknesses, and maintaining a lifelong faithfulness to Him. This is a delightful, challenging Bible study.”

Jeannie suggests that the study is best used individually: “It’s pretty long. And because leaders are busy, to add on another Bible study might be a challenge.” She suggests that leadership teams could meet once a month to discuss one topic from the study—not just talking about the discussion questions, but sharing the concepts they learned from their own personal study.

Jeannie says she will probably add the award money to a women’s ministry fund. “Sometimes when I travel, I want to buy something for pastors’ wives or ministry people,” and the fund makes that possible.

Of the recognition, Jeannie says, “When you’re writing something, it takes a long time. Sometimes in the midst of it, you can get a little discouraged. Sometimes you think, Is this really going to be something that will benefit the Body of Christ? The Writer of the Year Award was to me an affirmation. I felt the judges did catch my passion and desire for women’s books, so I was really encouraged by that.”