INDIANAPOLIS---In 2003 Matt Barnes walked into the Capitol building in Indianapolis, sure of a burden from God to reach the legislators of Indiana, but unsure of how to go about it. 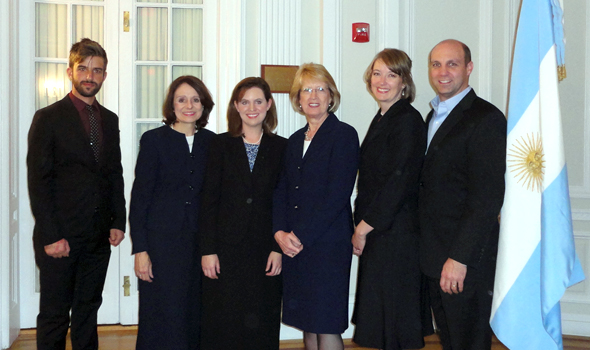 INDIANAPOLIS—In 2003 Matt Barnes walked into the Capitol building in Indianapolis, sure of a burden from God to reach the legislators of Indiana, but unsure of how to go about it. God began to open doors for him in amazing ways, so that today he is the beloved chaplain of the Indiana Legislature, without ever receiving an official invitation or vote! In this capacity he holds weekly Bible studies and chapel services, but mostly his ministry is one-on-one as legislators and staff members approach him and ask if they can talk with him, or ask if he will pray with them.

After seven years, Matt sensed a need to bring a lady alongside to be available to the women in the Capitol. Through mutual friends he met Chaplain Pamela Russell and asked her to consider coming to Indianapolis twice a week during the legislative session, and once a week the rest of the year. Pam is the founder and director of Almond Tree Ministry of Bible Baptist Church, Kokomo, Ind., and is a community service chaplain endorsed by Regular Baptist Chaplaincy Ministries. In the three and a half years since Pam began doing this with her co-laborer Ruth Salmons, she has found more and more ladies hungry for a weekly time of Bible study, prayer, and fellowship with other believers. Others stop her to share personal concerns and prayer requests.

Matt’s first passion, he says, is prayer for the legislative community—for the individuals, not for the issues on the agenda—and for that reason he has launched a website (publicservantsprayer.org) listing legislators from all 50 states, with brief personal information. Individuals can sign up to receive three names a day from their state or three a week to pray for specifically.

After Matt began feeling his way in this unique ministry, he learned that God had already put a similar passion on the hearts of other men, who had formed Capitol Commission. Currently 22 states enjoy the godly, prayerful presence of Capitol Commission chaplains.

In Argentina, God was placing a similar burden on the heart of Baptist pastor Luciano Bogarra, who formed Parlamento Y Fe (Parliament and Faith). Pastor Bogarra contacted the Capitol Commission president to ask if the corporation might coordinate a conference in Washington, D.C., to receive training on the best way to affect the various national governments.

Matt and Miriam Barnes and Pamela Russell were among the approximately 60 attendees who attended the November conference. Nine Central and South American countries were represented by pastors and other men with the vision for this ministry goal, at what they hope is the first of many such conferences.

Tuesday evening the Argentine Embassy hosted the opening reception, and the choir from the Bible college associated with Pastor Bogarra’s church presented a concert. Wednesday morning they met in the Sam Reyburn Government Building and were challenged by Pastor Bogarra from Micah 5:8, and U.S. Congressman Marlon Stutzman, followed by lunch at the Dr. James Kennedy Center for Christian Statesmanship. Thursday and Friday featured workshops and special speakers, including Dr. David Gibbs from Christian Law Association.

On Friday morning Pam spoke to the other ladies at the conference on “Developing a Ministry to Women Legislators.”

Pam reports, “I had the opportunity and great privilege to minister to the wives and women who came, to pray with them and encourage them, and share from Scripture their calling as Titus 2 women first, then as citizens of their country, showing the Biblical evidence that from the beginning God has used women to impact their capitols, their national leaders, and legislation for Himself and His kingdom; and that we have a calling from God to pray for our nations’ capitols and political leadership (Jeremiah 9:17–21; 1 Timothy 2:1–4). Many told me how excited they were at what they learned, and that they were eager to go home and share with the women in their churches and to gather women together to pray for their national leaders. May we be as eager!”

Now that more churches and schools are open and fall is rolling around once again, how do churches get people back into Sunday School? Here ...more

Churches like ours—theologically conservative, cessationist, Baptist churches—are not widely thought of as having a deep appreciation or passion for the Holy Spirit. Whether or not ...more