Plant a Church—and Watch It Grow 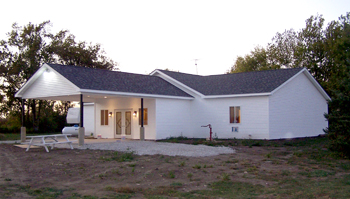 BUSSEY, Iowa—At first glance, Bussey, Iowa, seemed an unlikely place for a church plant. But Pastor Brad Hansen had been called nontraditional before, having been a jack of all trades and a truck driver before entering full-time ministry in his early 40s. But that’s another story.

Three families approached Pastor Hansen separately about the need for a solid, fundamental work in this town of 425 in south central Iowa. He realized planting a church there was what God wanted him to do, but how? He called his friend Joe Hayes, state representative for the Iowa Association of Regular Baptist Churches. Joe said, “I don’t know how either, but I know someone who does.”

Pastor Brad and Marie Hansen signed up for candidate school for that fall at Baptist Church Planters in Elyria, Ohio. Although the town of Bussey is small, John Little, regional fields director for BCP, could see the need for Bussey and the surrounding 10 miles, which includes the small towns of Hamilton, Lovilia, Pershing, Harvey, and Tracy, none of which have a Baptistic work. He could also see the faithfulness of a solid, core group of believers—six families that had begun meeting in a house basement in spring 2009. So the BCP family came alongside to help organize Community Regular Baptist Church.

Before long, Next Town Evangelism, a ministry of the IARBC, also gave its support to the project. So Pastor Hansen became a missionary church planter. His status was, once again, “nontraditional,” being on deputation while ministering to a church already started and trying to reach a community with the gospel. “Deputation meetings are exciting and encouraging, but it’s difficult to be in two places at once,” says Marie Hansen. “Offerings and gifts have been generous, but frankly, in today’s uncertain economy, regular support is hard to come by.” Pastor Hansen requested no salary from the church until it got a good start, but the church insisted on giving him a housing allowance. His part-time job as a paramedic specialist at a nearby hospital is his primary source of income. It also gives him many opportunities to minister and witness to others.

Community Regular Baptist meets in Pastor Hansen's garage prior to the construction of a church building.

For several months Community Regular Baptist Church met in the Hansens’ basement and then rented a café downtown. Then while restoring a room of his garage for a wood-working shop, Pastor Hansen realized that space would temporarily work as a church building. So the group of 20–25 began meeting in the 14′ x 28′ a room. And it was okay that there was no room for a piano—there wasn’t a pianist among the congregation. A song leader accompanied the group with his guitar.

The church worked on its by-laws, getting advice and examples from several sources. Once they were finalized, Pastor Hansen filed the appropriate forms with the state of Iowa, and Community Regular Baptist Church became an official church in October 2010.

“We knew this location was only temporary, and, as offerings accumulated, we looked for a place to grow,” Marie says. “We prayed, searched, and waited on the Lord. A few possibilities came and went. Then, in February of this year, after only two years of existence, we paid $15,000 cash for almost two acres right on the highway a mile south of town—God’s provision, timing, and location!” Meanwhile, Baptist Church Planters was in the process of merging with Baptist Missionary Builders to form Church Care Construction. Community Regular Baptist would be one of the first to benefit from this new entity.

After a two-month delay due to the needs of a church in Chicago (“God’s timing again,” Marie says), lead builder Brent Howard arrived. The church made a few major changes in the floor plan, held a ground-breaking ceremony, and got started June 21. A week later the construction crew poured the footings while Pastor Hansen took his family to the GARBC Annual Conference in Denver, where the church was accepted into the GARBC fellowship. Volunteers arrived from New York, and on July 5 they poured the floor; by the end of the week the building was almost completely framed.

“The whole summer went that way,” Marie says. “Help came from New York, Ohio, and even some from Iowa.” The first week of August the congregation hosted Vacation Bible School in the enclosed building, and a young girl was the first to be saved under the new roof. “Praise God—that’s what it’s all about,” Marie says. “He provided, protected, sustained, and directed. People gave their time, money, material goods, and prayer. Someone donated money for the carport; another gave a new kitchen stove. Several dedicated most of their summer to the project. Trips were made once or twice a week for building materials.

“A few minor mishaps and misunderstandings happened, but nothing God couldn’t handle—just reminders to do things His way instead of ours. One step followed another and now, with the dust settled, you can drive up from the south, over the hill, and there it is, a beautiful building ready to be used for His glory.”

The congregation moved in and held its first Sunday service in their new facility on Oct. 2. One week later 60 people gathered to dedicate the new building and rededicate themselves to God’s work. John Little spoke in the morning on “Looking Back,” and Joe Hayes spoke in the afternoon on “Looking Ahead.” Several people shared testimonies, and through special music and congregational singing, the attendees—accompanied by a pianist on the church’s freshly tuned piano—lifted up their praises to God.

The celebration continued the following Sunday, as the church hosted an open house and concert for the general public from 2:30 to 5:00. New contacts were made and old connections renewed as members visited with friends and neighbors.

“Thank you to all who prayed for us,” Marie says. “We are excited about using these facilities to edify believers and reach and disciple souls for Christ. A local church has been planted and has started to grow, but this is just the beginning.”