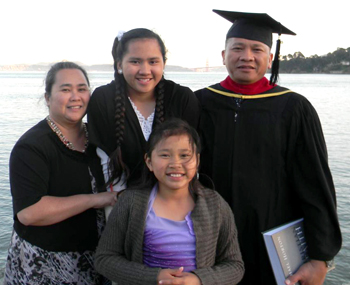 Philip made a commitment to serve in Thailand when he was 10 years old. The decision was prompted by the visit of a Filipino missionary to his church, who gave a wonderful testimony of God’s grace.

Two months after Philip married his wife, Belinda, in 1995, they arrived in Thailand as traditional church planters under the Philippines Association of Baptists for World Evangelism. Supported by their home church and other churches in the Philippines, they planted two churches in 14 years, one Thai and one Filipino.

The Floreses and their two daughters, Blessedda Jireh and Bethany Jadestiny, began serving in evangelism and music at Grace Community Baptist Church while Philip completed his degree at Golden Gate Seminary. A call to pastor the church came not long after his graduation. He will begin full-time ministry in January.

"Your word I have hidden in my heart, that I might not sin against You" (Ps. ...more

A minister in Manipur, India, says he will not feel at ease ministering outside his home until he can build a fence around the orphanage ...more