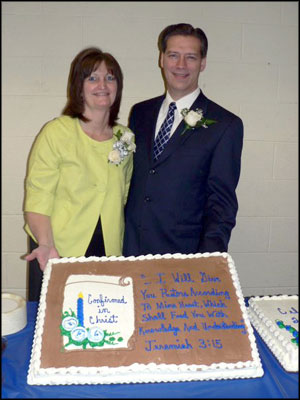 BEREA, Ohio—On March 8, Berea Baptist Church surprised Pastor Kenneth Spink and his wife, Debbie, with a God-honoring celebration of their 25 years in the pastorate. Pastor Spink began his ministry at the church as youth pastor in 1982, when Derwin Hauser served as pastor. Two years later, Spink became the senior pastor. Although he was only 25 years old, he was regarded by the membership as having the right heart for the Lord, the Word, and the church.

As part of the morning worship service, Ken’s original letter of commission was read aloud. He and Debbie then received a basket full of letters and a handmade shepherd’s staff, which members of the church later signed.

Next post The Case for the Singularity of Pastors