WINTER HAVEN, Fla.--April 3, 2011, marks the 12th April Faith Day. Assistant to the Pastor Stephen Simpson explains: “Every year, on the first Sunday in April, we give an extraordinary and sacrificial offering to the Lord." 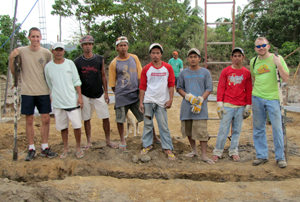 Ten thousand dollars of the April Faith Day offering will go toward building a church for believers in the Philippines.

WINTER HAVEN, Fla.—In September 1999, Pastor Nate Osborne went to the deacons of Faith Baptist Church to propose taking a special offering the first Sunday in April. He set a goal of $50,000 and proposed putting $20,000 in the building fund and giving the rest away. April 2, 2000 came, and April Faith Day was born. Over $50,000 was collected in that first offering. Twenty thousand was given to Camp Sparta, Sebring, Fla.; $5,000 to missionary Johnny Binzel; and another $5,000 to missionary Leon Fisher.

April 3, 2011, marks the 12th April Faith Day. Assistant to the Pastor Stephen Simpson explains: “Every year, on the first Sunday in April, we give an extraordinary and sacrificial offering to the Lord. The purpose of the offering changes each year. Some years our offering has gone exclusively to Faith’s 100 [the church’s missionary agency]. For several years we were in the midst of a capital campaign and added the April Faith Day offering to the building fund.”

Since 2000, the family of believers at Faith Baptist has given away over $200,000. In 2010, the church gave $5,000 to help Pastor Pierre Maxime with an orphanage in Haiti, and set aside $5,000 for the church’s own adoption fund (to help families in the church adopt children). Stephen says, “In previous years we have given large gifts to help the ministries of Camp Sparta, Camp Gilead, EBM, Kent Craig [ABWE], Camp Grace (in N.C.), and the Totmans in Niger, Africa. We have helped Leon Fisher send hundreds of Russian kids to summer camp and bought a truck to help the itinerant ministry of Togbe Emmanuel, a missionary in Africa. Many more missionaries and ministries have been helped through the April Faith Day Offering.”

On April 3, God enabled His children at Faith to give more than $178,000 for the Faith Day Offering. The money will be split equally between the building fund (for the next building project) and missions work. In addition to funding Faith’s 100, the missions portion will be set aside for a youth missions trip ($5,000), for Pastor Peter Brock to minister at a church conference in Peru, and for a partnering endeavor with Fellowship Baptist Church in Lakeland to assist a missions project in the Philippines ($10,000).

Joy amid Chaos in Myanmar

A ministry in Myanmar is finding joy amid ...more

The ladies' ministry at Faith Baptist Church enjoyed a ThanksGIVING Fellowship with the theme “A Thankful Heart ...more

Members and friends of Maranatha Baptist Church are praising God for His protection after a delightful trip turned ...more