New Books for a New Generation

Regular Baptist Press is developing a new series of books to define and defend the core values of our association, with the first title to be released at the 2011 GARBC Conference in Denver, Colo.

Baptists have been printing books since the 1600s. Back then, it was dangerous—Benjamin Keach was thrown into stocks for publishing a Baptist catechism for children. But when our movement of Regular Baptist churches started in 1932, Baptist publishing was in the middle of a dry spell. Churches had few options, choosing between material that denied the basic doctrines of the faith, or choosing books that ignored the distinctive beliefs of Baptists. Summarizing the situation in 1951, Robert Ketcham said most publications “did not have a single drop of Baptist flavor.”

Originally recognized as the go-to source for Baptist Sunday School curriculum, RBP also became known as an excellent source for theology books such as Paul Jackson’s The Doctrine and Administration of the Church, first published in 1956. But Jackson’s well-regarded book also illustrates why we need to continue publishing new works. When today’s seminary student opens Jackson’s book to read a defense of congregational government, the student finds very little. Is that because Jackson did not embrace the idea? No, but it shows how Jackson worked and wrote within the spirit of his times, when the Biblical basis for congregational government was assumed rather than proactively taught.

We need to publish new books—not because we’ve changed, but because the world around us is changing. In an era when Christian academic publishing has exploded, our formal response to the rapidly changing world of ideas has been meager! And because we have not written such works ourselves, we have largely allowed our position to be defined by our critics.

New authors. While we have a storied history of publishing books about our core values, we have never done so in any systematic way. We tended to publish books whenever an author submitted a good manuscript (somewhat randomly), rather than proactively developing an integrated series of titles for which we carefully recruited authors and subjects. To implement this idea, we are actively recruiting our movement’s best scholars and pastors as authors. And we are in the process of appointing an editorial review committee to oversee the project, drawn from the faculties of several colleges and seminaries, and including pastors from GARBC churches.

New target. The new products will be aimed at pastors, church leaders, seminary and college students—anyone who is interested in an in-depth exploration of the theology and practices of Regular Baptists. Young Baptist fundamentalists have become an identifiable (but difficult to quantify) demographic with specific publishing needs. Our young pastors and students look to our movement’s leaders to teach the values of our association—but they also expect a multifaceted, mixed-media approach including traditional printed books, electronic books, websites with sermon audio and video, downloadable resources, and interactive blogging. For our new generation of customers, “reading” is not limited to ink on paper.

New funding. Developing a new series of this scope is both time consuming and costly. We are grateful that Regular Baptists around the country are partnering with us to support our development costs. Donations of $20,000 have already been committed to the project, and we are aggressively seeking others who can support our up-front costs. Some of these funds are being given to academic institutions to fund positions for editorial assistants, allowing professors to concentrate on the conceptual parts of manuscript development.

New appreciation. Our movement has won many friends who are developing an appreciation for “regular” Baptist ideas. Having rejected the excesses of evangelicalism (on the left) and cultic fundamentalism (on the right), many Baptists have found a home in our orthodox, centrist coalition of independent Baptist churches and ministry organizations. In a day when the religious world seems increasingly fragmented, such an evaluation may strike some as overly optimistic. Nevertheless, we believe that our ideas, properly stated, will unite many of the “kissing cousins” who have historically shared out beliefs. 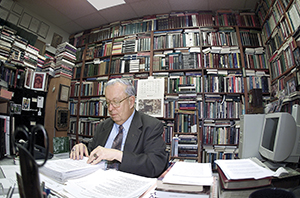 When Myron Houghton earned his driver’s license, his father promised he would either pay for a new car or pay for Myron’s education. Myron Houghton laughs about this now. In retrospect, the car would have been cheaper.

While teaching at Denver Baptist Bible College and Seminary, Houghton became convinced that Baptists should understand other theological systems as they are taught by their respective proponents. Continuing his studies, Houghton earned an MA from St. Thomas Theological Seminary (Roman Catholic), a certificate of theology from St. Stephen’s Course of Studies in Orthodox Theology, and a ThD from Concordia Seminary (Missouri Synod Lutheran).

Yes, the car would have been cheaper!

Calling the distinction between law and grace “the key to understanding my theology,” Houghton argues for progressive revelation that finds its fullest development in the theology of the Epistles. For Baptists, the basis for our understanding of the New Testament church comes from a rigorous ordering of our beliefs according to the pattern taught in the Epistles—hence, the foundation of our beliefs.

The centerpiece of Houghton’s book is a well-developed exposition of law and grace from Paul’s epistle to the Romans. Houghton’s words are a necessary antidote in a postmodern world where a new perspective on Paul has led to less confidence in what the Holy Spirit is saying to us today. Keeping in mind his churchly goals, Houghton ends his book with a discussion of practical matters—answering questions about Sabbath-keeping, tithing, and the believer’s responsibility to follow grace principles for godly living. 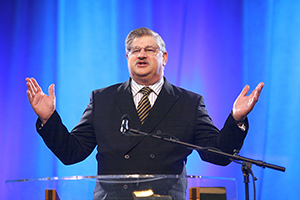 “I don’t like the very first B,” says Bauder when explaining how his new book will depart from the BAPTISTS acrostic that is often used to teach the Baptist distinctives. Bauder’s concern is that the idea of Biblical authority is not really a Baptist distinctive—it is a fundamental of the faith affirmed by all true believers. “The only people who deny Biblical authority are the people we would not recognize as Christians in the first place,” Bauder says.

Instead, Bauder begins his book with a discussion of Baptists and New Testament authority, believing this to be the genuine distinctive that sets Baptists apart from many other groups of Christians. Baptists insist that the present form of the church is uniquely a New Testament institution, Bauder says. As a result, Baptists look to the New Testament to discover the church’s nature, mission, and order—this is why Baptists often use the phrase “New Testament church” to describe themselves.

Bauder hopes to pattern his writing after the expository works of C. S. Lewis and J. Gresham Machen, and especially enjoys reading B. H. Carroll for his eloquence in expressing the Baptist distinctives.

Like many Bible college students of his era, Bauder was assigned to read Paul R. Jackson’s book published by Regular Baptist Press, The Doctrine and Administration of the Church. “It was the reading of Jackson’s book that first opened my eyes to the whole discussion of Baptist distinctives,” Bauder says. He credits several in the Regular Baptist movement who have contributed to his understanding of Baptist ideas, especially his former professor at Denver Baptist Bible College, Dr. Robert Delnay. He also cites early Regular Baptists such as Robert Ketcham and Oliver W. Van Osdel, the pioneer separatist and father of the Regular Baptist movement who was the subject of Bauder’s MA thesis.

Kevin graduated from Faith Baptist Bible College in 1979, then earned MDiv and ThM degrees from Denver Baptist Theological Seminary. He was formerly pastor of Immanuel Baptist Church, Newton, Iowa, during which time he enrolled in the DMin program at Trinity Evangelical Divinity School, researching the special needs of pastors who lead congregations in average-size towns. His resulting DMin thesis was “The Implementation of the Planning Cycle at Immanuel Baptist Church of Newton, Iowa: a Smaller, Regular Baptist Congregation.” Recognizing that God might be calling him to an academic life, he pursued a second doctorate at Dallas Theological Seminary, earning a PhD in systematic and historical theology in 2001.

The new project on Baptist distinctives also marks a transition for Bauder. In July he steps down as seminary president to assume a newly created position at Central Baptist Theological Seminary, research professor of systematic theology—what Bauder calls “a dream job”—while remaining a member of Fourth Baptist Church in Plymouth, Minn.

“Our desire is to provide Dr. Bauder with the opportunity to make an important contribution to the current body of theological literature,” says Dr. Matt Morrell, pastor of Fourth Baptist, when announcing Bauder’s new position.

While a student at Faith Baptist Bible College in the late 1970s, he earned the nickname “Gunpowder Bauder”—but it had nothing to do with his ability to speak and write about controversial issues. He has had a long interest in gunmanship and the shooting sports (his favorite guns are a 7 x 57 Mauser rifle and a .45 automatic Colt pistol). He also enjoys reading and the fine arts. He and his wife, Debra, have two adult children.