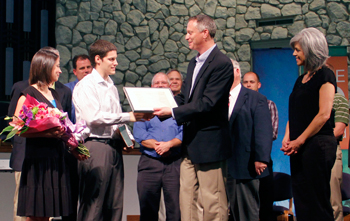 TOLEDO, Ohio—Emmanuel Baptist Church has ordained Mark Self to the gospel ministry. He and his wife, Anahi, are the church’s pre-field missionaries to Buenos Aires, Argentina.

Twenty-five pastors and deacons assembled to examine and question the candidate on July 12. His father, Ron Self, veteran missionary to Argentina, also joined via Skype, asking him questions specifically pertaining to evangelizing Catholics, who form the majority of the population of Argentina. The candidate’s brother, Andrew, was also present. The two-hour session ended with a resounding recommendation from the examining council to the church, followed by a luncheon. Pastor Duke Crawford gave a four-point charge to the new pastor in an ordination service the following Sunday evening.

Mark is a graduate of Faith Baptist Bible College, Ankeny, Iowa, and holds a degree from Virginia Beach Theological Seminary. The Selfs have 65 percent of their support and hope to be on the field in early 2014. Gifts for their ministry may be given through Baptist Mid-Missions; designate the gift for the ministry of Mark Self (account number 706173).