March Madness with an Evangelistic Twist

CRESAPTOWN, Md.—March Madness basketball came to Calvary Baptist Church, as it has for the past 19 years, in the form of a three-on-three tournament. 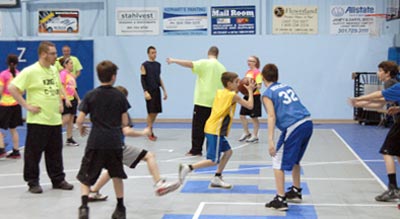 CRESAPTOWN, Md.—March Madness basketball came to Calvary Baptist Church, as it has for the past 19 years, in the form of a one-day three-on-three tournament.

Pastor of Student Ministries Mike Lashbaugh says the original vision and ongoing purpose of the tournament is to present the gospel. Every year a guest speaker gives a challenge and an invitation for salvation. This year it was seven members of Liberty University’s SOAR Dunk team. Liberty’s website describes SOAR Dunk as “a high-flying dunk basketball team that uses acrobatic maneuvers off of trampolines to dazzle crowds of all ages” and boldly share their faith in Jesus Christ.

The team ministered over three days at Calvary, beginning in a Friday chapel at Calvary Christian Academy, when the team performed for the students and then shared their testimonies and issued a spiritual challenge. On Saturday during the tournament, SOAR Dunk did a show, again with testimonies and a challenge, but they also gave a salvation invitation.

On Sunday morning the SOAR Dunk team wowed a crowd of 340, giving the team an opportunity to share their testimonies and a brief challenge. Then, after presenting a message on rebounding, Calvary’s Pastor Bruce McBride gave another salvation invitation. 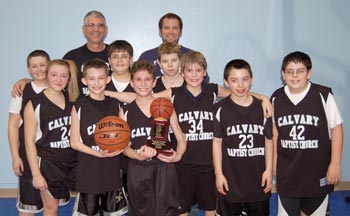 The church also sponsors a Youth Basketball League, December—March, open to community youth, with Calvary’s coaches and referees coming only from within the church. Other churches in Maryland, West Virginia, and Pennsylvania are also part of the league.

Pastor Mike says the players learn the game of basketball, sportsmanship, and character; plus they are exposed to positive adult role models. A coach himself, Pastor Mike sees coaching as “an opportunity to introduce my players to Jesus. That’s the real goal and focus of the league.”

The church reaches different groups of youth through the Youth League and the 3-on-3 tournament, says Pastor Mike. “A lot of people who will come and play in the tournament play on division-level school teams and can’t be part of our basketball league. But this tournament gives them the opportunity to participate.” Through its basketball ministries, the church has seen teens, and even some parents, trust Christ as Savior and join the church. Pastor Mike also sees his youth group grow during basketball season. Admittedly, some visitors drop away after the season, but others continue to attend.

Pastor Mike says, “In the seven or eight years I’ve been coaching, the Lord has always been faithful: each year at least one person from my basketball team has gotten saved. And that’s why I coach basketball.”