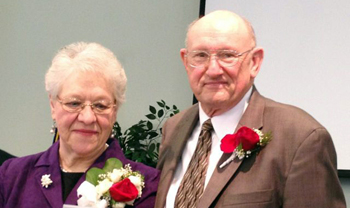 TUNKHANNOCK, Pa.—James Howell has retired from Northmoreland Baptist Church after 30 years as pastor there and 45 collective years in ministry.

Although Howell is retiring from the pastorate, “he’s not packing up and moving,” says church member Rod Decker, professor of Greek and New Testament at Baptist Bible Seminary, Clarks Summit, Pa. Pastor Howell “keeps talking about his continued ministry here. He talks about visiting and counseling and praying and preaching. . . . So even though we now have the task of filling a fairly big pair of shoes, we can be glad that we do not lose a friend.”

Along with Howell’s predecessor, James May, Decker was asked to speak at Pastor Howell’s retirement service. Decker reproduced his comments on his blog, NT Resources.

Northmoreland Baptist Church in rural Tunkhannock, an area of the Endless Mountains, meets in a beautiful 18,000-square-foot facility constructed in 2008 by Baptist Missionary Builders. With the agency’s help, the church was able to save on half of its construction cost—“a wonderful example of a local church partnering with a mission agency,” says Chris Hindal, director of GARBC International Ministries, who visited the church last year to share highlights of the organization’s work around the world. (Baptist Missionary Builders has since merged with Baptist Church Planters. Read about their merger in “Mission Organizations Merge.”)

Despite enjoying a variety of activities in its new facility, the church has been in local news recently as the state wants to collect taxes from the church’s new fellowship hall. (Read “Judge Rules Fellowship Hall Tax Exempt.”) Howell, known as a pastor who cares for his people, says the new church “was built to further our ministry of reaching our children, teens and adults with the Gospel and to be a blessing to our community,” not to merely have a good time—as the county contends.

Speaking at the retirement service, Decker concluded his remarks by pointing the congregation to 2 Corinthians 4. “In it the Apostle Paul speaks of his own ministry,” he said. “Now an apostle is not the same as a pastor, but there are many similarities in terms of the ministry of each. Certainly the heart of what Paul describes in 2 Corinthians 4 epitomizes the attitude of a good pastor. It is certainly a fair tribute to our pastor’s attitude and a good test for anyone we consider to become our next pastor.”

The service was “a curious mixture of joy and sadness,” Decker says. Sadness because it marked the end of a ministry, but joy because that ministry was long and fruitful, producing many blessings for Northmoreland Baptist Church.