Over a plate of roti, rice, and chicken curry, Henry John invited me to go to India with him. Sent by Maranatha Baptist Church, Grimes, Iowa, the Johns became missionaries to northern India in 2004. 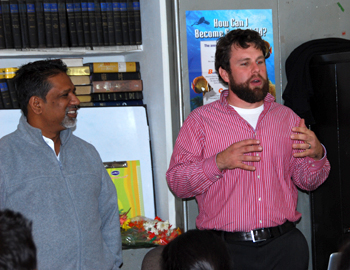 Over a plate of roti, rice, and chicken curry, Henry John invited me to go to India with him. I have known Henry for the past 10 or 11 years. We attend Maranatha Baptist Church, Grimes, Iowa, together. I have worked with his two kids, Josh and Sharon, in the youth group ever since they started coming. I have prayed often for his wife, Molly, and the kidney problems she faces.

Sent by Maranatha Baptist Church, the Johns became missionaries to northern India in 2004. After starting three churches in five years, they were forced back to the States for the foreseeable future due to Molly’s health issues. That was 2011.

This year Henry began talking to me at church about going on a missions trip with him to India. We would be teaching modules in the seminary he started before he left. His plan was to return three times a year to India, taking pastors and other qualified laymen along to teach various modules at North India Baptist Seminary. The seminary was a way that he could still be active in India while having to remain permanently in the U.S. He asked if I would be interested in going. I hesitated slightly.

“Come over to my house for dinner sometime and we will talk about it more,” he said.

That night at his house, I learned a lot about India, the three churches he had planted, and his vision for the seminary. By the end of the evening, I had committed to go with him the following fall.

As plans were being made, two more men from our church joined us: Paul and Steve.* Together the three of us would teach three different modules while Henry translated. We began working on curriculum and syllabi. We made arrangements for our airfare and housing. The module week was set for Nov. 11–15.

We landed in India on Nov. 8. We collected our bags—minus Steve’s lost bag—and then made the long drive north to Dehradun.

Dehradun is located in the Utrakhand Province of northern India. Northern India is home to approximately 540 million people; roughly 86 percent of those are Hindus. Muslims make up 12 percent, with the remaining 2 percent being shared by Sikhs, Jainists, Buddhists, and Christians. There are few Baptist churches in northern India and only one Baptist seminary.

Upon arrival, we spent the first night in the church, Maranatha Baptist Church. Church services are different there. There are no pews. There is no auditorium. We did not sing to a piano. We held church in a small house, with believers packed into the biggest room. They sat on white, plastic lawn chairs. Those who did not fit inside sat on the porch outside, listening through the open door. We—or rather they—sang in Hindi. Paul preached while Henry translated.

From the church, we moved to a Christian retreat center, nestled quietly in the shadows of the Lower Himalayas. This retreat center provides housing, meals, and a classroom for North India Baptist Seminary to meet in. This is the first time the school has held classes there. It used to hold classes at the church, but there just was not enough room. NIBS is praying that it will have a place of its own someday.

Paul is teaching pneumatology; Steve, the Pastoral Epistles; and I am teaching the book of Acts. We have 17 students in our classes. Several are pastors. Many are laymen. There are a few women. Some are working on MDiv degrees. Others are working toward a master or a bachelor of theology degree. All are excited to be here and eager to learn. The first 15 to sign up get full scholarships. The remaining two have to pay a little to come. They all get free notes and books.

In an area where sound Biblical teaching is scarce, these believers drink in the truths of the Word of God. They ask questions. They take painstaking notes. They sit in class all day. A sobering thought crosses my mind: We are training the current and future generation of Christian leaders in northern India.

A light in a dark night, however small it may be, still chases away the darkness surrounding it. In the days to come, we pray that many other little lights, little churches, will spring up in northern India because of North India Baptist Seminary.

Mike Gittens attends Maranatha Baptist Church, Grimes, Iowa. Henry John is always looking for qualified men to participate in these trips with him. The general qualifications are an MDiv or higher education level. If you are interested, please contact Henry for more information at the4johns@gmail.com.

*Names have been changed to protect individuals’ identities.

On the association level, major decisions are being made regarding our annual conference. The Council of 18 conference committee has developed an alternative option, which ...more

Why We Won’t Have Online Communion

Observing the Lord's Table remotely might not be the best ...more