TOLEDO, Ohio---Emmanuel Baptist Church has celebrated Heritage Sunday. The event marks 113 years since a group of 48 believers organized the church on May 3, 1898. 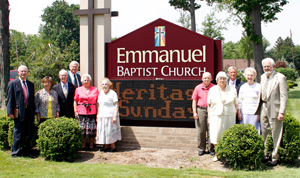 TOLEDO, Ohio—Emmanuel Baptist Church celebrated Heritage Sunday. The event marks 113 years since a group of 48 believers organized the church on May 3, 1898. Emmanuel Baptist marked the anniversary by honoring 12 people who had been members for 50 years or longer. More than 100 from the senior citizens group known as Emmanuel Lights gathered for an old-fashioned picnic and a vintage car show. Ribs, fried chicken, potato salad, beans, and cobblers were on the menu, and 10-15 cars added ambiance and class.

The church also honored Bruce Snyder, associate pastor, and his wife, Ellen, for 50 years of pastoral ministry. Many of those years were spent in ministry at Emmanuel, where Snyder has served as associate pastor on three separate occasions.

The years have brought many changes and moved this church forward, but the message hasn’t changed. The Emmanuel family has worshiped in three locations, beginning at Oakwood and Detroit Avenue, moving to Grand and Waite Streets in 1947, and to the present site on Laskey Road in 1961. Over the last 50 years, several additions have been added to the original 500 seat auditorium and classroom building on Laskey Road. In 1964, the Fellowship Hall and second classroom wing were built; new office complex and sanctuary in 1972, which was remodeled in 1998; in 2007 the Adult Bible Fellowship wing, a foyer, and ladies’ restrooms were remodeled as well as a new roof added to the church. The church is in the process of building a new wing for its children’s ministry. Emmanuel Baptist Church has been instrumental in starting three other Baptist churches in the Greater Toledo area. —Jenifer Christiaanse, photos by Ralph Mungons

Members of Emmanuel Baptist for 50 years or longer:

Next post Ladies Learn to Make “Music of the Heart”

David Gunn, director of Regular Baptist Press, reminded Ohio pastors that “discipleship is not just one of the church’s various functions; rather, it is the ...more

The Council of Eighteen—governing body of the General Association of Regular Baptist Churches—met virtually on Nov. 16 and 17 to make strategic plans for the ...more

One of the greatest gifts a pastor can give to a congregation is to teach God’s people how to read their ...more