CHICAGO---A group of five teens and three adults from Breesport Baptist in Breesport, N.Y., just returned home after helping run a week of children’s programs at Harbor House in Chicago. 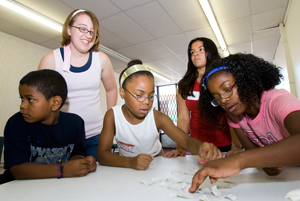 CHICAGO—Mission teams from across the country spent the summer helping at Harbor House, a ministry of River North Baptist Church in Chicago. A group of five teens and three adults from Breesport Baptist in Breesport, N.Y., just returned home after helping run a week of children’s programs.

“I’ve never done this before,” says Lisa Mallecoccio, who helped planned the event. A member of Breesport Baptist’s Ladies Missionary Fellowship, she wanted her church to get involved in a summer missions project. Because Breeseport Baptist supports missionaries Bill and Tamra Branks, the project was a natural fit.

Adults Thomas and Shirley Dean co-taught the Bible lessons and memory verses. The teens helped the children find and follow the story from the Bible text, later leading in games, music, and skits. Branks reported that the high attendance this summer was 32 children one day. Twelve children made professions of faith this summer

Joe Benjamin came with the group, just before leaving as a freshman at Davis Junior College in Johnson City, N.Y. “I was burdened to do inner-city work with children. This was like God’s opportunity for me. You pray for opportunities like this and you take them when they come,” Joe says.

Bill said he came up with the idea for Harbor House after talking with three people from his River North church who came out of gang backgrounds. They all said that coming home after school to find no adults at home and spending the rest of the day hanging out on the street were big factors in why they turned to gangs for acceptance. The River North church intends Harbor House to be a safe place for kids to find love and acceptance.

Branks says the purpose of Harbor House is evangelism and discipleship, but church members also try to connect with the children by helping them with homework and computer help. “We help them learn, and we also connect with their interests,” Branks says.