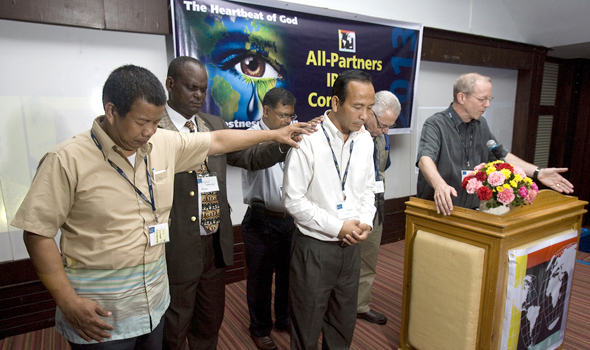 The IPFBM partners had elected Dr. Stephen in a business session earlier in the day.

Dr. Stephen serves as a national missionary under Global Access Partnerships (a ministry of the Association of Baptists for World Evangelism), and also as the president for Baptist Partnership Ministry in Nepal and Myanmar. He served as association representative for 14 years with the New Testament Baptist Churches Association, Manipur, India. He will succeed Chris Hindal, who was elected at the first All-Partners Conference in 2009.

Also Thursday evening, Chris Hindal announced that the Council of Eight had voted to accept the application of the Fellowship of Biblical Baptist Churches in Manipur, India.

On Friday morning, Dr. Stephen spoke in the final session of the conference. “I believe that the IPFBM is a partnership that will stir our hearts and bring back a revival,” he said.

Dr. Stephen pointed to the apostle Paul’s commitment to the gospel as a challenge for the IPFBM partners to emulate. “Paul loved the gospel. It’s not enough just to love it; you have to live it,” he said. “It think the next level for us is obedience, no matter what it takes, no matter what it costs.”

Dr. Stephen challenged the IPFBM partners to live a life of holiness and a greater passion for winning the lost. “We have so much more technology today,” he said. “Paul was only one man, but he was reaching his world in his time. What about us today?” 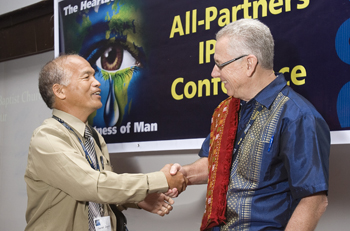 Acknowledging that many, many parts of the world were represented in the room, Dr. Stephen encouraged the partners to become greater friends and to share their needs and ideas for evangelism with each other for the benefit of the gospel.

“We are not alone,” he said, “and there is no room for selfishness or isolation. On any continent Paul had friends. Share your needs. I believe that the partnership needs to keep informed. If something is worth doing, we can do it together, and we will be behind it. Partnership is all about the common goal. As John Greening [GARBC national representative] would say to us, ‘Together we can accomplish more.’”

In closing, Dr. Stephen challenged the partners to work together until the group regathers for another conference. “What is your vision? We want the IPFBM to be a strong platform. We want to come together, sit together, pray together, and work together for a noble cause—the cause of Christ. That is the IPFBM, and that is you and me,” he said.

“I hope that the next IPFBM conference will have one thousand people,” he said. “It’s time to pray, and it is time to participate.”

Following the session, as they often had done all week, the partners and new friends gathered in small groups, embraced, posed for pictures, exchanged business cards, and assured each other they would be in their prayers.

Some were headed straight to the airport, while others were staying in Bangkok for a two-day extended tour of the city.

In her Wednesday afternoon women’s workshop, Jeannie Vogel, wife of Empire State Fellowship representative Jim Vogel, spoke on “Ten Things That I Needed to Learn in Ministry.” “And I am still learning,” she said. Jeannie shared Scripture on topics like how to serve difficult people, how to build others up, correcting people gently, and admitting our need for prayer as leaders. The women joined her in the conversation by discussing these topics and sharing personal examples from their own ministries.

At the same time Jeannie was speaking to pastors’ wives, Chris Brown of TechPartner was talking to a room full of men about information technology topics and strategies for reaching people for Christ.

“First of all, I’m a geek—not a Greek and not a nerd.” He explained that a geek is someone who is obsessed with technology tools and techniques, and that he was there to give them information and share creative ideas that might help them in ministry. “I want to help you and be a resource for you,” he said.

During the lively interactive discussion, Chris was inundated with questions about the best ways to use the Internet, social networking, and new technology devices with often limited means and access. Chris gave practical ideas and low-cost strategies for communicating with their other international partners and for spreading the gospel.

Wednesday night speaker Earl Magdale of the Philippines challenged the audience about ministering to Filipino Muslims. He talked about the ways the group has been marginalized because of their reputation for violence and persecution of Christians, but said many Muslims believe Bible characters actually existed and that many of the Bible’s stories are true.

Magdale challenged the audience to be bold and see Muslims like any other unreached people groups who need Christ and are earnestly seeking truth.

He told the story of a converted teenage Muslim girl who chastised a group of believers for not being bold to speak the truth to her people despite the threat of death and persecution. “She said to us, ‘You had the truth, but you kept the gospel to yourself because you were afraid and selfish.’ When she told us that, we just bowed our heads and could not say a word,” he said.

On Thursday morning, Rev. Nate Beckman, a Baptist Mid-Missions missionary to Thailand, spoke. Nate and his wife, Kamonthip, have two children and are planting a church in the Pinkalao area of western Bangkok.

“The true weight of evangelism rests on the shoulders of the people sitting in our churches every Sunday. Training our people to be evangelists is our biggest responsibility. It does not rest on your shoulders alone. Rededicate yourself to the job of bringing up disciples, not just believers.”

Darrell Goemaat is director of photography for the Baptist Bulletin.

Next post Tent Revival Brings Many to the Lord