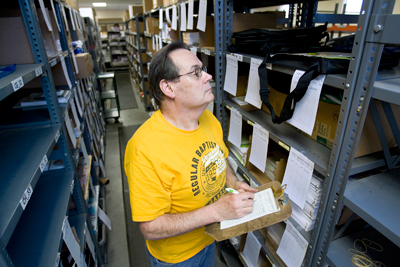 The GARBC announced two important contract agreements after the Council of Eighteen meetings in November, including formal details of the Meacham Road property sale and a new business agreement with Awana to outsource shipping operations.

The GARBC has signed an agreement with a Chicago-based developer who will purchase the Meacham Road property for $4.5 million in a process to take up to a year. The developer will perform several due diligence tasks over the next six months before committing nonrefundable earnest money. The developer will need four additional months to secure various approvals from the Village of Schaumburg.

As part of the purchase agreement, the developer is helping the GARBC find new office space nearby, with GARBC administrators currently considering several property options. The Awana agreement allows the GARBC to close its warehouse and shipping operation, currently housed in a 30,000 square foot space at its Meacham Road facility. The new GARBC Resource Center will be considerably smaller and less expensive.

“The biggest benefit for us is the opportunity to release resources that are currently tied up in our 60,000 square foot  building,” says Michael Nolan, the GARBC’s director of business administration and treasurer. Pointing to the property’s prime commercial location, Nolan says, “Our current property is worth more to a real estate developer than it is to the GARBC. We’ll tap these resources by paying off our mortgage, investing in our GARBC ministries and Regular Baptist Press. We will solidify our ability to help churches for years to come.”

“Our customer service representatives will continue to take calls and generate packing lists, but Awana will pick, pack, and ship the products,” Nolan explained. The RBP warehouse will close in January, with the Awana operation functional by Jan. 15. Nolan does not expect any shipping delays during the transition. The Awana warehouse, located at 1620 N. Penny Ln. in Schaumburg, is only a mile from the current GARBC Resource Center.

Awana Distribution, the shipping division of Awana Clubs International, brings significant industry experience to the new agreement, operating an 80,000 square foot warehouse with a sophisticated management system. RBP and Awana have both been noted for their customer-focused supply chain management; both have shipping accuracy rates greater than 99 percent. Nolan was attracted to Awana Distribution because it allows RBP to continue its reputation for fast and accurate shipping.

“Awana’s technology is compatible with ours,” Nolan says, adding that Awana has agreed to purchase some of RBP’s warehouse equipment when it closes in January.

The new agreement has some precedent. Prior to 2000, the GARBC rented warehouse space from Awana on an as-needed basis.

The agreement comes as publishers continue to struggle with rising shipping costs. According to a recent industry study, FedEx and UPS rates have increased 29 percent over the past five years. The greatest increases have occurred in small parcel shipping (packages under 10 pounds), just the sort of package that publishers ship most frequently. Consumers might be paying less at the gas pumps right now, but this potential cost savings has been offset by other pressures on the parcel shipping industry. In the aftermath of slow economic recovery, Wall Street investors have pressured FedEx and UPS to reduce costs and increase profitability. Shipping rates continue to rise.

Order fulfillment operations such as RBP and Awana can contain costs by merging operations; the combined higher volume allows the publishers to qualify for better shipping rates.

Michael Nolan characterized the five-year agreement as a business contract for warehouse and shipping services, not a joint venture or a partnership. All RBP products will be shipped separately in boxes with RBP labels. The RBP administrative and editorial staff will not be affected by the agreement and will continue their role as the publishing division of the General Association of Regular Baptist Churches.

The GARBC Resource Center warehouse is staffed with five full-time and two part-time workers. Paul Stump, recently honored for 30 years of service, will retire during the transition.

Despite the difficulty of the decision, Nolan describes compelling financial reasons for the GARBC to make this transition. Closing the GARBC warehouse will result in an estimated cost savings of $200,000 a year, primarily from reduced labor costs, reduced supply costs, and significantly lower building expenses. As the GARBC continues to look for nearby office space, Nolan estimates that the new GARBC Resource Center will be one-third the size of the Meacham Road site.

The GARBC expects to spend about $1.25 million for new office space, including the cost of retrofitting and remodeling. When the $4.5 million sale of the Meacham Road property is completed at the end of 2014, the GARBC will pay off the Meacham Road mortgage (currently about $780,000) and immediately fund the entire cost of a new facility. Remaining cash from the transaction will bolster a GARBC contingency fund, pension fund, and ministry funds for future initiatives.

The transactions, though complicated, could reduce the GARBC’s annual operating expenses by $500,000 a year. The GARBC will no longer have mortgage payments and will benefit from lower warehouse costs, lower shipping costs, and the reduced operating costs of a smaller building.

Several formal decisions have made the recent actions possible. Messengers to the 2013 GARBC Conference voted unanimously to authorize the Council of Eighteen to sell the Meacham Road property and acquire replacement property. A year ago the Council of Eighteen had authorized Nolan to investigate the possible outsourcing of the GARBC’s order fulfillment; the matter was discussed again at the June and November 2013 Council meetings.

The developing news was first reported in “GARBC to Sell Meacham Property, Relocate Nearby” (September/October 2013). The Village of Schaumburg, home to the GARBC Resource Center since 1976, has enjoyed robust commercial development centered on the Meacham Road corridor, where land sells for a million dollars an acre.

“We have fond memories of ministry in a functional facility. But nostalgia is not enough to sustain a viable organizational future,” says John Greening. “Recognizing changes that should be made, we are creatively designing new systems and aggressively pursuing opportunities that can be maximized. I am pleased to be part of a team that rises to the challenge of the times and makes the most of our resources. May God prosper these actions in the days ahead.”

The Children’s Assistance Friendship Foundation in Monrovia, Liberia, has begun an agricultural project that will help underwrite the cost of Christian ...more