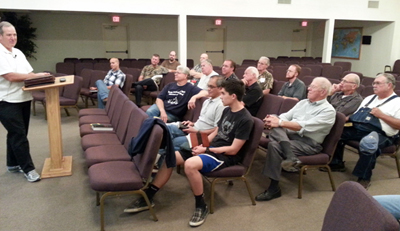 If we really understand the goodness of God and all that He wants to do in us and for us, Leavell said, we would more easily be able to withstand temptation and trust the Lord in times of difficulty.

In addition to the spiritual challenge, the men played a few “manly” games, says Terry Green, pastor of Victory Baptist. Games included a running relay using 20-pound dumbbells as batons; volleyball; “softball,” which meant hitting a kickball with a two-by-four; and driving two-inch screws into a four-by-four using a #2 Phillips screwdriver.

Green says, “As you would expect, with a couple dozen guys gathered, we also told a few stories and ate some extra dessert.”

Encouragement and Friendship at Pastors' Fellowship

Every month several southern Illinois pastors who serve with the Illinois-Missouri Association of Regular Baptist Churches meet for fellowship and ...more