For the Love of Saipan

ANKENY, Iowa---When Katie Peters returned to the states last year from Saipan, she wouldn’t have dreamed that she would be going back to the island to lead her alma matter’s first sports missions trip. 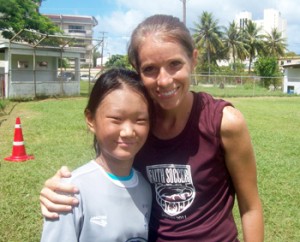 ANKENY, Iowa—When Katie Peters returned to the states last year from Saipan, she wouldn’t have dreamed that she would be going back to the island to lead her alma matter’s first sports missions trip. Peters is assistant women’s soccer coach at Faith Baptist Bible College, Ankeny, Iowa, and a former CNMI Women’s National Soccer Team player. “Katie’s love for the people of Saipan and for the sport of soccer sparked a conversation with director of athletics Brian Fincham, which ultimately led to an exciting athletic ministry opportunity on the tiny island, over 7,000 miles from Des Moines,” says Faith Baptist Bible College.

Katie earned a BS in Elementary Education from FBBC. Upon graduation, she traveled to Saipan to teach, and while there she began her coaching career, coaching the CNMI Youth National team, the under-12 boys’ team of Saipan, and the Eucon International School boys’ and girls’ elementary teams. She remained in Saipan for three years, but it was that love of people and soccer that led her back to the Pacific island. Peters, along with seven others from FBBC—Coaches Mark Stupka and Lance Augsburger and student athletes Laura Fowler, Paul Speed, Kimmy Terlouw, Rachel Worman, and Sara Worman—headed to Saipan for a two-week soccer camp. 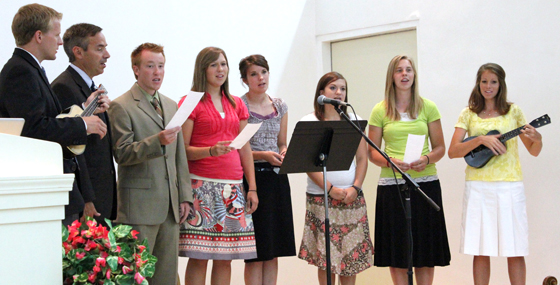 Peters’ friend Brenda Hendrickson was visiting Saipan just as the team finished its ministry and talked with Peters about the trip.

How did you come to be involved in playing for the Women’s National Soccer Team in Saipan?

I love soccer, and soccer is incredibly popular in Saipan. I was playing for a women’s recreational league team, and two of my teammates also played for the national team. They suggested that I try out, so I did.

Being on the National Team might sound a little more glamorous than it actually is. The team has tryouts once a year, usually in August, to prepare for its annual game against Guam in April or May. Occasionally the team plays in tournaments overseas—I also traveled to Taiwan and Japan—but the team’s main preparation is for its one annual game. Preparation for that one game is incredibly intense, however, with daily practices and strict diets. There’s probably a good spiritual application there! Also, I wasn’t paid to be on the team. But there was no expense to me either; all of my trips were paid for.

How were you able to organize the soccer camps for the children?

I used my connections with the Northern Marianas Islands Football Association and former national teammates. I e-mailed them and informed them of the camps and then asked them to spread the word to the youth league coaches and teams, which they all happily did. Once a newspaper and news channel found out about the camps we were hosting, they volunteered to do a newspaper ad and TV spot advertising the camps.

Did you work with a local organization, or did you set up the camps on your own?

Essentially I worked with the Northern Marianas Islands Football Association, since it allowed our team to use all its equipment and its field. We were able to plan and structure the camps as we wanted; NMIFA provided the necessities we needed to run the camps.

What did a typical day at soccer camp look like, and how did the team incorporate the gospel? 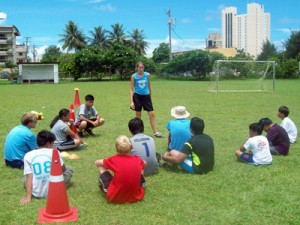 The camps took place each weekday morning and were divided into three different age groups (K–2nd grade, 3rd–5th grade, and 6th–8th grade). Each age group’s camp lasted one hour. During the last few minutes of each camp, we took turns sharing our testimonies and the gospel with the kids. We also passed out “wordless book” beaded bracelets and helped the kids understand what each color meant. At the beginning of the camps, the kids didn’t respond too much to the gospel presentation, but by the end of the two weeks, they started to ask questions. Parents, too, had many positive comments about the camps and what their kids were learning about God.

In the afternoon, we would do a little sight-seeing and experience life on the island, and then in the evening, we scrimmaged some of the adult and under-15 island teams. Then on Wednesdays and Sundays, we ministered in a local church. We provided special music and offertory, preached, and led Bible studies.

Approximately how many kids attended the camps?

There were a total of 50 kids at the camp—about 12–15 in each of the three age groups every day.

Describe one memorable moment when you could see God’s hand in this experience. In other words, what would you point to and say this has all been worthwhile?

This actually happened when you [Brenda] and I walked into a restaurant one morning for breakfast and were greeted by our waitress, Rose, a very sweet, soft-spoken Filipino lady. She looked at me and said, “You—you are Miss Katie, right? My son Matthew came to your soccer camp last week. He had so much fun! He showed me the bracelet you gave him and he told me all about what the different colored beads stood for.”

Though no specific decisions for salvation were made during the trip—at least what the team knows of—the team was faithful in planting seeds, and it was so exciting to hear that the seeds we had planted in Matthew had continued as he shared the gospel with his parents.