BATAVIA, Ill.---Everett Hawbaker, a retired GARBC pastor and former Awana executive, died on Jan. 25 after a long struggle with progressive supranuclear palsy. He was 82. 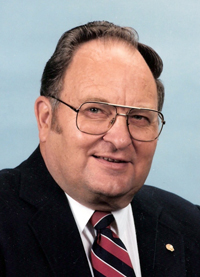 BATAVIA, Ill.—Everett Hawbaker, a retired GARBC pastor and former Awana executive, died on Jan. 25 after a long struggle with progressive supranuclear palsy. He was 82.

Everett answered God’s call to ministry at age 18. He graduated from Baptist Bible College and Seminary, now of Clarks Summit, Pa., and Central College, Pella, Iowa, in 1953 and 1954. Over 52 years, he served as pastor, specializing in strengthening young churches.

Everett joined the staff of Awana Clubs International, Streamwood, Ill., in 1985 as director of U.S. Missions. He was instrumental in Awana’s transition to a global ministry. As representative for Northern Eurasia and as director of International Missions, he traveled many times to Russia and Eastern European countries assisting believers as they started and maintained Awana clubs in local churches. Everett personally transported many supplies and worked with translators in the production of Awana materials in different languages.

A strong believer in the value of Christian youth camping, he took leadership in the operation and maintenance of youth camps at Iowa Regular Baptist Camp, Clear Lake, Iowa; Camp Manitoumi, Lowpoint, Ill.; Awana Scholarship Camp, Lake Ann, Mich.; and the Black Hills of South Dakota. Combining his love for Christian camping with the value of Awana, he assisted in the establishment and direction of Awana Club camps in Ukraine and Kazakhstan from 1993 to 1997.

“Everett’s story starts thousands of miles from Siberia—on a farm near Dallas Center, Iowa,” says Linda Weddle, senior writer for Awana, in her article “A Far-Reaching Influence.” (Linda is also the author of the popular T.J. series of books published by Regular Baptist Press, now out of print.) Everett’s parents were active in a legalistic church that focused on the social gospel and good works as the way to salvation. But after listening to a Back to the Bible radio broadcast, his mother—and then his father—came to realize their church was not teaching the true gospel and left that church. “At random,” Linda says, “they chose a Baptist church in the nearby town of Perry”—First Baptist Church, a GARBC church.

Everett told Linda, “We had no idea what a Baptist church was like. Our only point of reference was Back to the Bible, so my father said to the pastor, ‘We’re looking for a church that preaches the same thing as Mr. Epp,'” referring to Theodore Epp, the speaker on the radio program. “‘You’ll find that kind of Bible preaching here,’ the pastor reassured them.”

The faithful teaching of First Baptist Church led Everett to accept Christ as his Savior at 16, followed by his decision to dedicate his life to Christian service the next year. And today Everett leaves a legacy of faithful service to God and the communities in which he was called to minister.

He was preceded in death by his parents, John and Ferne Hawbaker; his older brother, Kenneth; his sister-in-law, Wava Hawbaker; and brother-in-law, Dr. Gordon Hess.

He is survived by his wife of 61 years, Carolyn; sons, James, Thomas, and Donald; daughters, Karen Willey, Deanne Wynne, and Laura Harrison; 25 grandchildren; 23 great-grandchildren; his brother, Marvin Hawbaker; and sisters, Clesta Keller, Susan Wright, and Marilyn Brower; and many nieces and nephews.

A pastor in Tanzania sends his thanks for Regular Baptist Press Sunday School ...more