HACKENSACK, N.J.---Eric Wohner has been called to First Baptist Church as pastor. 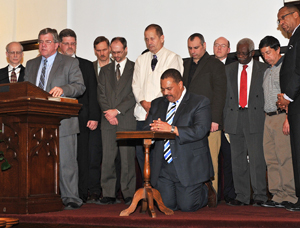 Eric Wohner is the new pastor at First Baptist

HACKENSACK, N.J.—Eric Wohner has been called to First Baptist Church as pastor. Eric most recently served with Evangelical Baptist Missions as a church planter at Cross Community Baptist Church in Queens, N.Y. “This is the world capital for the storefront church,” said Associate Pastor Michael Moultrie regarding Cross Community Baptist in the Baptist Bulletin article “Church Planting in New York City.” Storefront churches like Cross Community Baptist are prolific in Queens. “Folks could be walking to our church and pass several others on the way,” Michael says. Eric began ministering in Queens in 1999. His goal was to plant a church that reflects the diverse neighborhood of immigrants from Guyana, Mexico, Puerto Rico, Trinidad, and Eastern Europe.

First Baptist Church took part in Eric’s ministry for 15 years, supporting the Wohners and sending summer ministry teams of teens, most recently through Vision For Youth’s “New Hope for New York City” missions trip. Vision For Youth partners with inner-city churches in New York City, Chicago, and Philadelphia to give students across the U.S. a big-picture perspective of ministry. For its participants, these missions trips are true cross-cultural experiences without ever leaving the country.

At the installation service for First Baptist’s new pastor, Dr. John Williams of Baptist Church Planters, a long-time mentor of Pastor Wohner’s, gave the charge to the church. Donald LeMaster, pastor of Brooklyn Baptist Church, gave the charge to the pastor. The deacons and trustees joined ordained ministers on the platform for a dedicatory prayer. Also participating was Pastor Doug Henning of First Baptist Church, Perkasie, Pa., the Wohners’ sending church during their ministry with EBM. He prayed during the service, asking for God’s blessing on the Wohners’ new ministry.

Next post 'Spiritual Man' Considered at Men for Christ