SHAMONG, N.J.—Visiting the Holy Land is a trip of a lifetime, and several members of GARBC churches took just that opportunity to walk where Jesus walked. 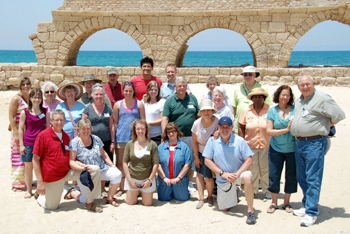 SHAMONG, N.J.—Visiting the Holy Land is a trip of a lifetime, and several members of GARBC churches took just that opportunity to walk where Jesus walked. Pastor Rich Van Heukelum organized the trip to Israel for his church, Shawnee Baptist Church. He asked Mike and Liz Augsbuger, pastor and wife at Willow Creek Baptist Church, West Des Moines, Iowa, to provide music and lead songs along the way. One other couple from Willow Creek Baptist joined members of Shawnee Baptist on the trip, as did a lady from Rochester N.Y., and her daughter from Peoria, Ill.

“Being able to sing together at some of the sites in Israel is a real privilege,” Mike says. “In fact, as you stand at many of the sites, songs just naturally rise up in your mind and heart.”

For eight days the group toured Israel, making a stop along the Jordan River where they were literally feet away from the country of Jordan.

There, in the Jordan River, Pastor Augsburger baptized a new attender to his church. Nate Carter thought it would be meaningful to have his new pastor baptize him in the Jordan as an expression of his faith in Christ. He plans to soon become a member of Willow Creek Baptist Church.

Pastor Van Heukelum has taken individuals on trips to Israel since 2006. This is his third trip, having previously hosted two trips for Walnut Ridge Baptist Church, Waterloo, Iowa, where he was pastor. He came to Shawnee Baptist in September 2010.

Of special delight on this particular trip, the tour guide was a believer, Pastor Augsburger says, “and was theologically in our camp, which was a great privilege.” As the group experienced the land, the guide continually wanted them to know more deeply that God is real and active in the world today.

“Visiting Israel definitely left me with a renewed sense of wonder for God!” Pastor Augsburger says. He hopes to lead a tour for his own church in a few years.

Next post Baptist Church Goes All Out on 4th