JASPER, Ind.---A Thanksgiving musical by the children's choir of Fellowship Baptist Church brought the Biblical account of Joshua to life. 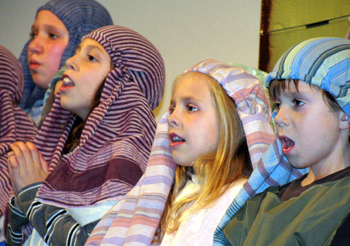 JASPER, Ind.—Many people, when reading events in the Bible, imagine those scenarios being played out as if they were eyewitnesses on the scene. Drama programs do that very thing—they allow guests to be eyewitnesses of a Bible-times event. A Thanksgiving musical by the children’s choir of Fellowship Baptist Church brought the Biblical account of Joshua to life. You’ve Gotta Be Joshin’ Us” tells the story of Moses sending the twelve spies into the Promised Land to bring a report back to the children of Israel. It is a story of falling under the influence of negative peer pressure, in contrast to acting on the positive promises of God.” Pastor David King says, “We know that there were many that doubted God’s ability to enter the land of Canaan under Moses, but after God’s 40-year discipline of the children of Israel, the next generation followed God and Joshua and saw the walls of Jericho fall down.”

On the day of the program, the sanctuary was transformed into a fellowship hall. Fifteen round tables that each seat eight people were covered with real tablecloths and set with seasonal centerpieces. The homey atmosphere was perfect for guests to enjoy each other’s company over a Thanksgiving meal. Six ladies on the social committee each cooked a turkey for the 5:00 dinner, and the guests arrived with the food they had signed up to bring.

Preparations for the musical itself, which followed the dinner, began over the summer, when director Penny Spangler met with the children’s choir—in kindergarten through sixth grade—on Wednesday nights. “It would only be for about an hour,” she says, “but during that time I would introduce the songs we would be singing along with some fun and games. Nothing too structured, but also getting the songs in their heads.”

When the school year began, choir practice for the kids also began. Sessions were held during the first 20–25 minutes of Sunday morning church services. Parents, then, didn’t have to bring their kids back at a separate time to practice. Penny says she has worked with children all her life, and worked in the public school system for 23 years. She says, “I know if you are trying to teach (especially songs) that you hit it quick and don’t drag it out. You lose them after 20–25 minutes. My teaching methods include back-and-forth repetition, putting words on paper for the older ones, and putting the older ones with the younger ones that can’t read.”

Penny also makes copies of the split-track CDs and gives the children their own to take home and listen to. Since Penny doesn’t play the piano, the CD “gives the children a chance to hear how the song goes, and then when we sing, we just dub the voices out.” Parents also help their children learn the songs at home, with many homeschooling parents choosing to integrate the music into their children’s curriculum. And at church, silliness sometimes reinforces the learning when the kids are encouraged to sing in different dialects, such as robot, baby, hillbilly, and English.

This particular program incorporated not only music but speaking parts. On a Saturday, Penny met for two hours with the eight girls who had speaking parts. “We would read over our script, practicing reading, talk about blocking (where you stand and how you move), and of course, have pizza!” One dress rehearsal took place the Saturday before the performance. With the props in place, the kids went through the program three or four times and were ready to perform for the congregation. “This is an exceptional group of kids and they take instructions very well,” Penny says. “And, of course, you have to have another pizza party when rehearsal is over! That’s the fun part!”

Fellowship Baptist Church is a smaller congregation, and communication with parents is easy, Penny says. But to run a successful program, she follows this guideline: “I have learned, you send home written instructions for all things. That way, [parents] have a copy in their hands and there is no question as to times, dates, other things that they need to know. I always format my communications in a way that is all on one page and they can hang it on the refrigerator for reminders.”

Parents are a key to any musical’s success, Penny says—parents who willingly help out in any area. “That, right there, is a key factor in having a successful choir!”