Charles H. Schulze with the Lord 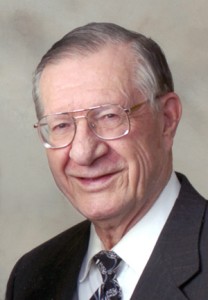 CANDO, N.D.—Charles H. Schulze, 83, went to be with the Lord on Oct. 22. After high school, he served for two years in the United States Army Air Corps. In 1950 he graduated from Macalester College, St. Paul, Minn. Ordained to the ministry in 1955 after graduating from Dallas Theological Seminary with a Master of Theology degree, he served as assistant pastor at Temple Baptist Church, St. Paul, and then as director of Christian Education at First Baptist Church, Rochester, Minn.

On Aug. 10, 1957, he married Norma Jean Vielguth, who was originally from Thief River Falls, Minn. During the late 1950s and early 1960s, he taught seminary classes part-time at Central Theological Seminary in Minneapolis, and then served as a full-time professor at Pillsbury Baptist Bible College in Owatonna, Minn. During his teaching career, he also served as pastor of First Baptist Church, LeRoy, Minn., for three years and then as pastor of Community Baptist Church, New Prague, Minn., for three years. In 1970 he became the pastor of First Baptist Church, Oakland, Minn., and in 1974 he became the pastor of Grace Baptist Church in Omaha, Neb. While in Omaha, he served on the Council of Eight of the Nebraska Association of Regular Baptist Churches and as a contract chaplain for Veterans Hospital. Following his retirement from his pastoral ministry in 1990, he served as a volunteer and contract chaplain for the Royal C. Johnson VA Medical Center in Sioux Falls, S.D.

Brother Schulze not only wanted to see people come to Christ, but he also wanted believers to grow in their faith. He wrote a discipleship study titled God’s Relay Team, based on 2 Timothy 2:2­: “And the things that you have heard from me among many witnesses, commit these to faithful men who will be able to teach others also.” Articles he wrote for the Baptist Bulletin included “The Reality of Hell,” “Me a Letter?” “You Want Me to Speak?” “Knowing That Christ Is Lord,” and “Serving Our Veterans.”

Three key elements are nurtured in each revitalization: focused prayer by the core, intentional discipleship that multiplies, and ...more

Emmanuel Baptist Church hosted a day of training in discipleship and church ...more