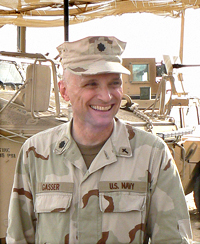 KANDAHAR, Afghanistan—Chaplain Bill Gasser is a Navy reservist endorsed by the Regular Baptist Chaplaincy Ministries. He is serving at Kandahar Airfield in southern Afghanistan on his second tour of duty in Southwest Asia. Kandahar Airfield is home to thousands of NATO troops, including U.S., British, Australian, Romanian, Slovakian, Belgian, German, and Georgian. In addition, several thousand civilian contractors provide services ranging from technical consulting to general labor. Recently Chaplain John Murdoch, director of Regular Baptist Chaplaincy Ministries, had the opportunity to ask him some questions about this assignment.

Where are you assigned?

I serve at the NATO Role 3 Trauma Hospital, a specialized unit designed to provide world-class trauma care for battlefield injuries. We’re staffed by medical professionals from the U.S., Australia, U.K., and other partnering nations. We treat soldiers of all nationalities as well as Afghan soldiers and civilians. By God’s grace, the hospital maintains a 98 percent survival rate of the casualties we receive. If you have a life-threatening injury, this is where you want to be.

What do you do?

My primary role is providing pastoral care for the hospital staff and patients. I do workspace visitation, counseling, evangelism, and discipleship pretty much every day. I lead small group Bible studies, chapel services in the hospital, preach at the main base chapel twice a month, and assist in other programs as needed.

How long is your deployment?

This time I expect to be in Afghanistan (“boots on the ground”) just over seven months. My total time away from home, including preliminary training in the U.S. and processing out on my return, should be about nine months.

KAF is one of the largest bases in Afghanistan, so we have a relatively comfortable lifestyle by Afghan deployment standards. Our workspaces and housing are mostly air-conditioned. We have access to three hot meals a day, all the bottled water you can drink, gyms, and telephone and Internet service most days. We have it better than many of the guys at the smaller camps, where conditions can be more primitive. Our workspaces are simple but adequate, and that’s where we spend most of our time. The normal routine is 12-hour workdays, six to seven days per week.

As a chaplain in today’s military, are you limited in your message or ministry to the troops?

No. I share the gospel of Christ freely in chapel services, Bible studies, and one-on-one conversations. In fact, I’m expected to do just that as a representative of our fellowship of churches. The only place chaplains have to be sensitive about using explicitly Christian language is at mandatory unit events, like a change of command ceremony, where attendance is required rather than optional. But voluntary services, meetings, and conversations are wide open. I’ve been a chaplain for many years and have never felt compelled to compromise my convictions. I wouldn’t be here if I were not free to preach Christ.

Yes, most people are more receptive here. It’s harder to ignore your own mortality in a combat zone. Life has fewer complications and distractions, plus more adversity. It tends to get people’s attention and make them think about what really matters.

From your perspective, how is the war going?

Only God knows for sure, but there are encouraging signs. If you follow the news, you know that the Afghan Army and police are now handling most of the security for their own country. And April’s general election saw more than seven million people (out of an eligible 12 million voters) cast their votes, despite the Taliban’s threats to do violence to anyone who came to the polls. I believe that’s a higher percentage than we typically see in America. I admire the Afghan people’s courage and commitment to their future.

What can we do to help?

We’ve invested plenty of money, men, and material here over the past 13 years, but I think the real answer for Afghanistan is prayer. We’re commanded to pray for those in authority so that we might live peaceful lives (1 Timothy 2:1–4). Prayer changes things, whether we’re talking about Afghanistan or America. Please also continue praying for the troops—that God would grant them success, safety, and a positive adjustment as they return home.

What do you miss most?

My family. Separation is clearly the hardest part of a deployment; spouses and children sacrifice as much as their soldiers do.

What blessings do you see coming out of your time in Afghanistan?

First of all, life-changing decisions of faith. People often tell me that they believe God brought them here to do a work in their lives. That kind of news probably won’t show up on FOX or ABC, but the Lord is working powerfully in people’s hearts. Another blessing is the privilege of seeing broken bodies healed at the hospital. Like a 10-year-old boy who’s running and jumping again after suffering a nearly fatal blast, or a soldier relaxing in a hospital bed after surgery for a gunshot wound, telling his family on the phone that he’s going to be okay. Those are priceless scenes. Deployment also gives me a deeper appreciation for my family (it’s no fun being 10 time zones away) and the privileges we enjoy in America. At home I can hop into my car anytime and drive where I want without taking a security escort. Not to mention indoor plumbing, fast Internet, home cooking, and so much more that I tend to take for granted. Deployment gives perspective and makes me grateful.