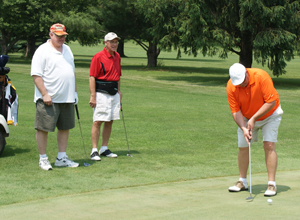 Fifty-six golfers from around Illinois met at the camp, June 3 and 4, in friendly competition in a best ball scramble format. Chris Hindal, director of International Ministries of the GARBC, challenged the group at the Friday night service with the wonder of the gospel and the responsibility to share it.

The next morning, Chris led in early morning devotions before the men returned to the links. The closing assembly included awards: Twelve men won individuals awards. A team from Calvary Baptist, Quincy, won first place; and a team from Germantown Hills Baptist, Metamora, won second place. In addition to paying their entry fees, the men raised money for the camp through sponsorships. Eight men from Germantown Hills Baptist had a total of 30 sponsors. Together all the golfers raised $3,000 for the camp, which intends to use the funds for renovation and remodeling.

The International Partnership of Fundamental Baptist Ministries is pleased to announce the acceptance of an association of churches in ...more

A ministry offering relief from flooding in India resulted in 23 people professing Christ as ...more