Bronx Church: God Is in Control

BRONX, N.Y.—Victory Baptist Church, though in its infancy as a church plant, has already seen its share of trials . . . and blessings. 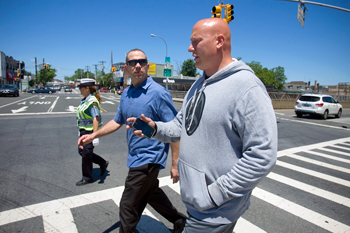 BRONX, N.Y.—Victory Baptist Church, though in its infancy as a church plant, has already seen its share of trials . . . and blessings. Victory Baptist was accepted into the GARBC fellowship as a mission church in 2011. Michael Nolan, director of Baptist Builders Club, and Darrell Goemaat, photography director for Regular Baptist Press, recently visited with its pastor, Ken Baker.

While discussing the present and the future, they took time to reflect upon the eventful past couple of years.

On Oct. 29, 2012, Hurricane Sandy hit the East Coast. “The building the church had been renting was left uninhabitable by 11 feet of floodwater,” according to the Baptist Bulletin article “A Gift That Lasts.”

Victory Baptist was forced to relocate. But Pastor Baker emphasizes the providence of God as he tells how the small church plant was able to find a nearby office space, get it in running order, and open the facility just 13 days after the storm.

Baptist Builders Club stepped in to help by granting the church emergency funds. Pastor Baker says, “We are grateful that our church is not alone and a part of an association of churches and a support system that helped us get resources needed so our people could go to work and open the doors of the church quickly and continue to minister to a hurting community.”

While the building has its struggles (people sitting in 12 seats on an upper level in the auditorium can’t see the pastor because their view is blocked by two pillars), it is a blessing that Pastor Baker never expected. Talking with Michael and Darrell, he reflected on all that God provided through the hurricane and the new facility.

Shortly after moving into the new building, he said, “I look around, at the potential that we have to serve Him in the Bronx. And we can reach more souls, and more people can get saved as a result of this building.”

Now he says the church is not far from considering holding a second service. He said, “Michael, who would have thought that such devastation and hurt also could be a blessing in so many ways. But God did, and He is in control.”