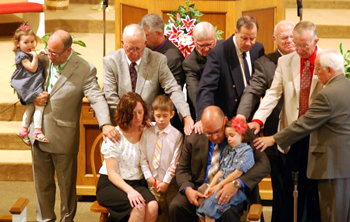 GRAND RAPIDS, Mich.—Good News Baptist Church installed Brian Cederquist as pastor on Sept. 8. He has been associate pastor of the church since 2008 and was ordained there in 2009.

Nearly 300 people attended the installation service and the brunch that followed. Pastor Jeff Holub of Fellowship Baptist Church, Des Moines, Iowa, Cederquist’s father-in-law, presented a charge to the church. Brian served as associate pastor there from 2003 to 2008. Pastor Karl Pike presented the charge to the new pastor. Pike is Cederquist’s grandfather and the outgoing pastor at Good News Baptist. He retired in May of this year.

Pastor Cederquist accepted Christ as his Savior at age 5 and was led to full-time ministry as a teen. He graduated from Faith Baptist Theological Seminary, Ankeny, Iowa, in 2006 with a MDiv degree.

Brian and Jenni Cederquist have been married since 2003 and have a son, Titus, and two daughters, Macyn and Ruby.