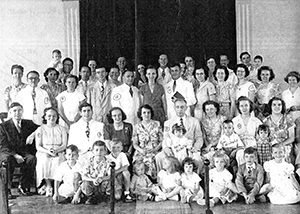 This year Baptist Mid-Missions is celebrating 75 years of ministry in Brazil. On Thursday evening of the 75th anniversary conference, held in Brazil, Dr. Charles Pettit of Piedmont Baptist Bible College asked how many years of service were represented by the missionaries present that evening. Many retired missionaries had returned from the U.S. for that conference. I happened to have the newly written History of BMM in Brazil right beside me, and I totaled the number of years of service represented by those missionaries—over 3,850! And that was just for those present.

In 1935, Baptist Mid-Missions entered Brazil at two widely separated points: the city of Manaus in the Amazon valley and the city of Juazeiro do Norte in the state of Ceara in northeastern Brazil. The first missionaries in the city of Manaus were Arlie and Herthel Ross, who immediately began a church-planting ministry. Shortly afterward, in 1941, they started an evening Bible institute. In 1947 that institute became Amazonas Baptist Seminary. In Juazeiro do Norte, churches and schools were also started. In 1946 they founded the Cariri Baptist Seminary. In 1952 a language school for new missionaries and an MK school were developed in Fortaleza. Baptist Mid-Missions entered south Brazil in 1951; its missionaries engaged in Jewish evangelism and a church-planting ministry in the city of São Paulo. As more missionaries arrived, the Brazil Field Council was divided into three regions: the North (Amazon) Region, the Northeast Region, and the South Region.

Current ministries in the Amazon Region include works in Rio Branco, Belém, Manaus, Itacoatiara, Boa Vista, and Santarém. Missionaries are involved in church planting, a seminary, an extension Bible institute, a bookstore, a Christian day school, Bible camps, ministries among the tribes, a state mission agency, and a state association of Regular Baptist churches. Missionary outreaches in the Northeast Region are found in the states of Ceará, Rio Grande do Norte, Paraiba, Pernambuco, Bahia, and Alagoas. The thrust of the ministry is evangelism leading to the establishment of local churches. Auxiliary and specialty ministries are a camp, a seminary, building, a language school, a school for MKs, radio, and aviation. In the South Region works are ongoing in São Paulo, Paraiba Valley, Curitiba, Uberaba, Brasilia, Goiânia, Rio Preto, Rio de Janeiro, Jundiai, and Sorocaba. Ministries in the South include church planting, Jewish evangelism, literature translation and publication, a church Bible institute, and Regular Baptist Bible Institute.

In 75 years, Brazil has developed partnering relationships quite similar to the structure of the GARBC, including a national association of churches, state and regional associations, mission agencies, educational institutions, and Regular Baptist Press of Brazil.

The first BMM missionaries in Brazil, Arlie and Herthel Ross, had close ties to Robert T. Ketcham, the former national representative of the General Association of Regular Baptist Churches. Arlie had been a pastoral assistant to Dr. Ketcham at Central Baptist Church in Gary, Ind., where his wife, Herthel, had worked as Ketcham’s secretary prior to their marriage.

In the days before a formal GARBC office was established in Chicago, many of the administrative tasks were handled behind the scenes by Herthel, who lent administrative support to many GARBC projects, in between her tasks for the Gary church. Arlie and Herthel left for Brazil in 1935 and served in the Amazon for many years.

In 1939, Dr. Ketcham introduced BMM missionary Wayne Barber to an unmarried Elva Oste, who was studying nursing. Elva had told Dr. Ketcham that she was dedicating her life to serve the Lord as a missionary in Brazil. When Dr. Ketcham met Wayne, he felt it was his God-given duty to introduce the two to each other. Wayne went to Brazil in December 1939, but soon started corresponding with Miss Elva. This long-distance dating by mail blossomed, and about a year later she received a letter from Wayne asking her to marry him. Her answer (by return mail) was yes. Wayne and Elva Barber served the Lord together in Brazil until Wayne’s death in 1988. Elva continued to serve in Brazil until 2005.

Dr. Ketcham’s daughter Lois was also one of the first BMM missionaries in Brazil. She and her husband, Don Moffat, worked in the Amazon. In her commissioning service, Lois told her sending church, “We are ready to serve Him in Brazil either by life or by death, or by broken bodies.” Seven months after she arrived in Brazil, she almost died because of a B1 vitamin deficiency. She nearly died on her voyage back to the U.S. as well, and spent almost a year recovering.

Reported in the Baptist Bulletin

Dr. Ketcham helped the BMM missionaries immensely during his years as editor of the Baptist Bulletin. The magazine published news from many BMM missionaries in Brazil (as well as in other countries) and told of their victories, struggles, sicknesses, close calls with death, fierce persecutions, and daily life. The early missionaries in Brazil faced fierce opposition. Their home Bible studies and open air meetings were broken up by priests leading rowdy mobs throwing sand, rotten fruit, and rocks. Once, one of the missionaries was simultaneously hit right above his eye by both an egg and a rock. He immediately reached up and covered that eye. Feeling the raw egg, he yelled to a nearby missionary, “Oh no! My eyeball is coming out!” By God’s grace, it was just the raw egg oozing down his face.

My favorite Baptist Bulletin article is in the February 1940 issue. Among the reports of ministry struggles and successes, it reports that a missionary family’s little black pig had six piglets. Baptist Mid-Missions missionaries in Brazil are grateful to Dr. Ketcham and the Baptist Bulletin for promoting missions in Brazil.

One missionary recently told me that when he was a child living in Brazil with his missionary parents, his parents had to take him to the emergency room many times. This missionary needed 30 stitches as a child due to his parents’ street meetings being broken up by rock-throwing mobs. Many of these early missionaries are now with the Lord. They are the pioneers, the ones who took the arrows.

Investing for the future

The biggest need in Brazil today is for more missionaries to continue spreading the gospel of Jesus Christ. Despite the work of BMM and other sound mission agencies, there are still many cities, towns, and villages with no Baptist church or gospel witness at all. Many of our missionaries are at or are past retirement age. Since 1992, the BMM missionary force in Brazil has dropped by 45 percent.

Through the long-term ministry of missionary work, an interesting transition is taking place. Brazil is still in a phase of spiritual harvest, but American missionaries increasingly turn church leadership over to Brazilian evangelists, pastors, and missionaries who are trained at seminaries and Bible institutes.

Brazil is rapidly changing from a rural nation to an urban one. It is one of the great melting pots of the world but still has large ethnic blocks of European, African, and Asian stock. Nearly 42 percent of Brazil’s population is under 15 years old. Another 27 percent is between the ages of 15 and 30. These young people seem more receptive to the gospel. As they are discipled and trained by missionaries and Brazilian leaders, they become the future of the church.

This is the legacy of 75 years of missions work.

S. David and Geri Smith are church-planting missionaries in Londrina, Brazil. They have served with Baptist Mid-Missions in Brazil since 1987. For more information about BMM missionaries in Brazil, visit www.victoryinlondrina.com/75BMMB01.htm.