AUGUSTA, Ga.---Col. Craig Wiley has retired from the U.S. Army after nearly 43 years of chaplaincy with the Regular Baptist Chaplaincy Ministries. 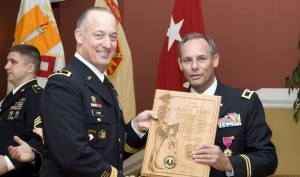 AUGUSTA, Ga.—Col. Craig Wiley has retired from the U.S. Army after nearly 43 years of chaplaincy with the Regular Baptist Chaplaincy Ministries.

In 1969, with the United States in the midst of violent anti-war protests, 19-year-old Craig Wiley voluntarily enlisted in the U.S. Army. “I joined the Army for patriotic reasons,” he says. “I believed the Army would shape me into a better person.”

Wiley selected the Military Police Corps because his father was a police officer and he thought after he completed his military service he would go into law enforcement. He completed Advanced Infantry Training at Fort Gordon in Georgia and then was assigned to the 104th Military Police Company there. The following summer he received orders to Vietnam. “We did things differently then,” says Wiley. “We shipped out alone to fill a vacancy; we never deployed as a unit like they do today.”

In August 1970 he began 18 months at the Long Binh Jail (humorously referred to as “Camp LBJ”), guarding U.S. Army prisoners. Wiley says he worked 12-hour days seven days a week caring for soldiers who had been arrested for drug use or trafficking, black-marketing, attempted murder, and the like. “I was in jail too—one of the good guys confined,” he jokes.

Before his tour was up, Wiley read a book that changed the direction of his life. The book was A Man Called Peter, the biography of Peter Marshall, a Presbyterian minister who later became chaplain of the U.S. Senate. “I read that book, bowed my head, and wept,” says Wiley. “It was the seeds to my conversion.” Two months after his discharge from active duty, friends in his home state of Michigan led him to faith in Christ.

A little over a year after he was saved, Wiley enrolled at Grand Rapids Baptist College. His roommate soon told him about a chaplain who needed an assistant. That chaplain was Regular Baptist Chaplain Clifford Owens.

Wiley says, “When I left active duty, it was my hope to never put on a military uniform again. During those months of active duty, I never had any concept at all of what it meant to be born again, nor did a chaplain ever explain my need of eternal life and a relationship with God through Jesus Christ. As a matter of fact, I do not ever remember meeting one chaplain in all my service time while on active duty. If I did, they made little impression. On this basis I saw the need for active, concerned, Bible-teaching chaplains.

“At first I was not very excited about going back into the service,” Wiley says, “but I realized that this could be a place for me to share my faith in Christ. So I decided to sign for a year.” He enlisted in the Michigan Army National Guard as a chaplain assistant serving under Chaplain Owens (who was also his pastor), and remained with the MIARNG through college and seminary. After graduating from Grand Rapids Seminary, he returned to active duty as an Army chaplain.

During his years as a chaplain, Wiley served with distinction at numerous CONUS posts as well as in Germany, Korea, Bosnia, and Kuwait. His final assignment was as Fort Gordon installation chaplain. “I started my career at Fort Gordon and I returned to end it here,” he said. “I am grateful to be in the position I am in today. I owe it all to God. I never worked to get promoted; I served my God, my commander, the soldiers, and their families.”

Wiley plans to remain active in a different venue of chaplaincy. A horseman and pleasure rider, he has accepted the position of executive director of Race Track Chaplaincy of America, and will assume his new duties in April.

“RTCA has provided tremendous ministry to the horse racing industry for over 40 years,” Wiley said. “It’s an honor to be selected as the next executive director, and my experience from the military chaplaincy provides the right background for this new opportunity. Jean and I look forward to our move to Lexington and making new friends.”