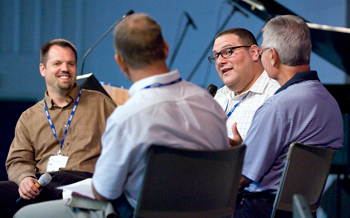 CLARKS SUMMIT, Pa.—On the last full day of the GARBC Conference, the conversation moved from theoretical to practical. Uncomfortably practical.

Pastor Will Hatfield was moderating a discussion with church planters, a fine civil conversation until he asked the three participants to suggest ways to increase church-planting interest.

“Answer the phone when we call you,” suggests Rob Rodriguez, lead pastor of CityView Baptist Church in Astoria, N.Y. “Or return an e-mail.”

Heads suddenly looked down. Papers were shuffled. Throats were cleared. Sentences were composed in the passive voice, just so the writers could avoid real action verbs.

But Rob Rodriguez pressed on. He knew the life of the pastor, having been one before he became a church planter. “I did the same thing,” he confesses. “I never answered the phone.”

“As pastors, we are geared to stay away from the conference displays because we don’t want a sales pitch. But when a church planter calls you, answer the phone anyway. You don’t know what God is going to do during that conversation.”

John Sauser explains further, making sure everyone understood just how uncomfortable this could get. He was an Iowa pastor, happily leading his church as they planted another church in nearby Williamsburg. He was implementing a common technique known as “mother-daughter,” where the sponsoring church sends out money and congregation members to start a new church.

“What I didn’t anticipate was that as my wife and I began to pray, God put His hand on our lives and said, ‘I want you to plant that church,’” Sauser says now, recalling three years of prayer as they began to understand the full implications. He ended up leaving the sponsoring church to pastor the mission work, a situation that led to growth for both groups.

Turning to the other pastors in the room, Sauser asked a direct question: “Are you sure that God’s plan for your life and ministry doesn’t involve planting a church? I think sometimes we leave that to the young men.”

Wrapping up the discussion, Pastor Jon Jenks asked the audience the obvious question: “Were you pushed a little bit this morning? Are you willing to pick one of these styles of church planting and be a part of it? Start that ball rolling!”

Or just answer the phone.

These service awards tend to end up on the mantles of Christian leaders who never actually retire. They’re still answering the phone, still engaged in ministry. During the presentation, John Greening teased Dr. Brock, now in his mid-80s.

Brock was pastor of three churches before becoming director of Lake Ann Camp. His idea was to impact campers by developing the camp counselors into more effective servant leaders. But he never promised a relaxing summer in the white pines of northern Michigan.

“Camp is for the camper,” Brock had insisted. “Not necessarily for the ease, convenience, or enjoyment of the staff.”

After the service, Brock was surrounded by his camp staff, now in their middle years, now busy as pastors, missionaries, and magazine editors. Perhaps a bit tired looking. The prospect of a white-pines retirement seems attractive, but there are phones to answer.

In a day that was full of challenges, Bill Park throws down a final one near the end of his closing sermon from 1 Timothy 5:17–25. “The church is humanly dependent on one crucial factor—the quality of our leadership.”