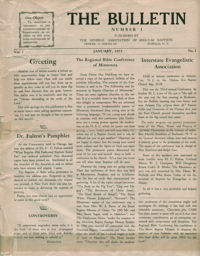 The first edition of the Baptist Bulletin was pulled off the presses in January 1933, just eight months after the General Association of Regular Baptist Churches was organized.

No one was surprised when this upstart group of twenty-two churches grew quickly. Most of the GARBC constituents had been active in the Bible Baptist Union, a significant movement that opposed theological liberalism in the Northern Baptist Convention. Starting a magazine seemed to be a natural extension of the growing association. Many church members already subscribed to Curtis Lee Laws’ Watchman-Examiner, the conservative Baptist newspaper that popularized the term “fundamentalist” in 1920.

This conservative influence was a matter of some concern. Worried that the Watchman-Examiner was becoming the unofficial voice of Northern Baptists, convention leaders established a competing newspaper in 1920, The Baptist, to voice their liberal agenda. In fact, one could argue that the fundamentalist-modernist controversy of the 1920s was a war fought on two fronts: the pulpit and the printing press.

“While major newspapers and magazines looked on, reporting sometimes in amusement, more often in condescension, and sometimes with partisan horror, most of the rhetoric of battle appeared in sectarian and small-circulation organs like the official The Baptist and the independent Watchman-Examiner,” wrote historian Martin E. Marty about the disputes. “These journals would be utterly unremembered, did not historians have to consult them in archives where they preserve recall of the sounds of battle.”

On the surface, Marty’s assessment of “utterly unremembered” publications seems correct. I doubt many of our readers still have copies of The Bible Baptist Union Herald lying around the house. And the same is true for the newspapers churned out by pastors of the era. W. B. Riley had The Baptist Beacon; T. T. Shields published The Gospel Witness; J. Frank Norris ran The Searchlight. Though such magazines may seem obscure today, these “sectarian and small-circulation organs” were important voices in the response to theological liberals. They published important sermons, Biblical exegesis, and historical analysis of the contemporary issues.

And when that wore off, these pastor/editors sometimes attacked each other! In other words, it was quite a bit like the Christian blogosphere today. Religious groups and religious leaders continue to search for the right balance between healthy criticism and bitter invective.

But this is where historian Martin E. Marty got it wrong. When historians quote these obscure Baptist publications, they aren’t just preserving the sounds of battle. The discussion continues because the ideas are still important. This is why we believe there is still a place for publications such as ours.

The premature death of magazines

Meanwhile, a magazine that once billed itself as “the only magazine from fundamentalists for fundamentalists” (maybe a mild insult?) has now ceased publication. And the Fundamentalist Journal, Jerry Falwell’s plan to articulate a new fundamentalism, lasted only from 1982 to 1989. Throughout the 1990s religious magazines went belly-up, with the final straw coming in 2003 when the venerable Moody Magazine discontinued publication. Despite its one-hundred-year heritage, the magazine could not survive a declining subscription base.

So on the surface it seems as if modern technology and dwindling interest have destroyed the market for old-fashioned ink-and-paper print magazines. The problem does not appear limited to relatively obscure religious publications. While I’m no great source for financial advice, I can tell you this much: I wouldn’t sell the family jewels to buy stock in Time or Newsweek. Weekly newsmagazines seem to be in an irrecoverable tailspin.

There is one ray of hope in the magazine industry: something called “niche/specialty market magazines.” While the once-popular news weeklies drown in red ink, smaller publications such as Potato Grower Magazine and Saltwater Fly Fishing have become successful by identifying a target audience and writing articles that are sharply focused on that audience’s expectations. This explains why the National Directory of Magazines lists a whopping 15,672 U.S. magazines published in 2007. Amazingly, 753 of these are in the category of religion and theology. In addition, the Associated Church Press lists more than 150 denominational magazines still in publication.

We believe our future lies in this trendy concept of narrowcasting. Folks will read our magazine if we continue to write articles that carefully articulate the range of Regular Baptist thought. If we try to be something we’re not—the next Time or World or Christianity Today—we’re likely to tank. If we continue to write the articles you can’t read anywhere else, we’ll be around for a long time.

Make no mistake: This is all about ideas. If we don’t articulate our beliefs, who will? That’s why we mail lots of free copies every month, including a free copy to each of our GARBC churches, our state associations and state representatives, camps supported by our churches, and hundreds of Bible college students. That burst of generosity will cost us about $20,000 this year, but we greatly value the opportunity to get these Regular Baptist ideas into the hands of our constituents and future leaders.

This is why we believe our website will become increasingly important. We are spending much time and effort in 2008 to increase the value of our online resources. These are free, for now, but by 2009 we expect to have special subscriber-only benefits at www.BaptistBulletin.org.

This is why we are trying to carefully define our audience. We’re not writing just for pastors and ministry leaders; we’re writing for the entire congregation. If we have a ministry of persuasion, we intend to carry it out from the bottom up, starting with the congregation (rather than imposing our viewpoint though the clerical hierarchy). We believe this style of writing reflects a good old Baptist idea: congregationalism.

A few mistakes now and then

Mistakes? Oh, we’ve made a few. Merle Hull, a former editor, used to laugh about the full-page ad we ran back in 1960 for the Revised Standard Version of the Bible—while at the same time we were writing editorials about the deficiencies of this translation. More recently we ran a fine obituary of Carl Elgena—but inserted a photo of his identical twin, Ken. I wish I could say this is the first time we made this mistake. As it turns out, the Baptist Bulletin also misidentified Ken Elgena in a February 1961 photo.

Some mistakes are harder to correct because they have a greater impact. We take seriously our mission to articulate Regular Baptist ideas—but sometimes the Regular Baptists have gotten it wrong. In weaker moments, our movement allowed the spirit of the times to cloud its agenda, despite our zeal for Biblical integrity and right thinking. To be sure, in seventy-five years of publishing, one can find examples where true words were written harshly, pet peeves were given too wide a platform, and false premises were dressed in proof texts. So we pray for wisdom and courage to sweep out the cobwebs when needed.

And now I’ve been with the magazine long enough to make my own mistakes. Last month I spelled the Baptist Bulletin as “Bullletin.” I wasn’t sure if this was a publishing “first” or not, having the editor misspell the name of his own magazine. Then my sixteen-year-old son, Paul, noted this mistake and responded in the normal way. He fired off a letter to the editor.

So happy birthday to us. And to properly celebrate, skip the cake and pull up a chair. We have ideas to discuss.