Too Busy for a Gospel-centered Ministry?

CLARKS SUMMIT, Pa.—If the guests at the 2012 GARBC Conference didn’t know any better, they would assume that the speakers had called each other the night before, agreeing to preach the same sermon several times in a row. Their titles were different and their texts were different, but Tuesday’s marching orders ended up sounding the [...] 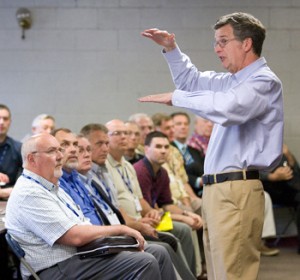 CLARKS SUMMIT, Pa.—If the guests at the 2012 GARBC Conference didn’t know any better, they would assume that the speakers had called each other the night before, agreeing to preach the same sermon several times in a row. Their titles were different and their texts were different, but Tuesday’s marching orders ended up sounding the same: The church has become distracted from its core task of sharing the gospel.

In the morning session, BBC’s Jim Lytle wondered if pastors were preoccupied with the current political season, rather than building relationships with people who needed their help.

“Paul said ‘Jesus Christ saves sinners’ and that’s what he wanted Timothy to get involved in. You fight that battle. You get dirty with people who need Christ. You walk them through the mess that sin is making of their lives, and you show them the way out,” Lytle says, asking the guests to “engage the right battles.”

Later, Paul Auckland sounded the same notes, with a special emphasis on teaching men to share Christ with each others. “What have we as pastors done to let our men get out of this responsibility?” he asks.

When speaking at the “For Men in Ministry” seminar, John Greening encouraged leaders to expand their ministry past the walls of the church. “I believe in the sacred desk of the church, but I am challenged by Paul at Mars Hill—he was reasoning in the marketplace,” Greening says. “Every day Paul was in the marketplace, engaging people on a grassroots level.

“In an association that highly values theology, it is easy for us to think all of our work is up here,” Greening adds, gesturing over his head, then asking if the men were “forgetting about the people down here.”

Workshop speakers seemed to echo the same theme. Dr. David Mappes would certainly win an award for the longest workshop title of all time, “The Nobility and Knowability of Scripture: An Overview of Contemporary, Postmodern Challenges to the Nature, Authority, and Knowability of Scripture.” But he quickly reminded his guests that “I’m not just an academic, I’m also a pastor.” Mappes, who has taught at Baptist Bible Seminary since 2008, filled his workshop with practical ideas to ministry leaders strengthen and preserve their doctrinal heritage. But he is especially interested in helping pastors learn to communicate with a postmodern generation that often looks at the world very differently.

Other workshop leaders included Sherrie Holloway, Paul Auckland, Nigel Black, and Ken Floyd speaking on a variety of engaging topics. And attendance was very strong—one of those days when very few people snuck out for donuts.

“We cannot allow ourselves to be distracted by passivity, pettiness, or misplaced priorities,” Greening said. “It is time for action.”

Also in the afternoon, forty-five teenagers piled into vans and headed into Wilkes-Barre, Pa. for the Students Alive! outreach activity. Loaded with business cards and coolers full of water bottles and popsicles, the students canvassed the streets offering the refreshment of cold water and Living Water.

The activity helped support a new church plant, one of nine churches that would be introduced into the GARBC during the evening service. Several service awards were given, followed by a prayer of dedication for the newly-elected Council of Eighteen.

Bill Park continued the series of expository sermons from 1 Timothy, addressing the matter of the “blameless” pastor in 1 Timothy 3:1–7. “God guards the authenticity of His church by communicating specific spiritual standards for us who lead His church. It is imperative to understand that our local church leaders are responsible for godly behavior, which sets the example for others to follow,” Park says, then asked all of the pastors and Christian leaders to stand for a prayer of dedication.

Worship leader Ken Pyne concluded the day by leading everyone in an old gospel song:

May the mind of Christ, my Savior,
Live in me from day to day,
By His love and power controlling
All I do and say.

But Pyne then continued to lead guests in all six stanzas, something not many worship leaders would do today, just so he could get to the final lines:

May His beauty rest upon me,
As I seek the lost to win,
And may they forget the channel,
Seeing only Him.

Other Tuesday news from the 2012 GARBC Conference

Don’t wait until after VBS to plan for follow-up. Here are six follow-up ideas for right ...more