The Christmas carolers from Calvary Baptist Church stopped by Ron Clark’s house in Lansdale, Pa., just long enough to sing a few songs and drop off some brochures. “They left all this material for us to look at,” Ron recalls later. 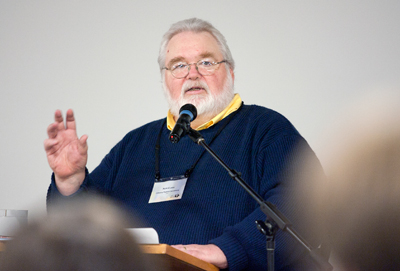 The Christmas carolers from Calvary Baptist Church stopped by Ron Clark’s house in Lansdale, Pa., just long enough to sing a few songs and drop off some brochures. “They left all this material for us to look at,” Ron recalls later. He knew a thing or two about corporate identity and public relations—already he had made and lost a tidy sum in the banking world. He says that he and his wife, Carol, were somewhat adrift—new believers, but not connected to a church. “It sounded great, except they were Baptist, and everybody knows Baptists are crazy.” Ron Clark would spend the rest of his life as a member of Calvary Baptist Church, where he worked and ministered to students at Calvary Baptist Seminary. To Ron’s way of thinking, the brief visit from the church carolers was the greatest day of his life—the day he and his wife found a church family. Ronald Clark, 62, died on Dec. 1, 2013, after a brief illness. “Ron was a gentle giant—faithfully and effectively sharing the hope he had found in Christ during his adult years with many, many hurting people,” says Sam Harbin, president of Calvary Baptist Seminary. When seminary students first attended Ron Clark’s seminars, they met a soft-spoken man in his early 60s, a giant who parked his cane next to the chair while he taught. The years had slipped by quickly, but it didn’t take too much imagination to see the young guy who the Detroit Tigers drafted in 1969. As told by Ron, this is not quite a “sports hero” story about the glory days. His athletic career was a prelude to something more important. The Detroit Tigers were fresh off a World Series championship when they heard reports about a catcher at Bowsher High School in Toledo. A Mud Hens scout had been keeping track of this kid since his freshman year. Now at six-foot-four and a solid 250 pounds, Ron Clark was the sort of player who always won the home plate collision. And with the best pitching staff in the major leagues, the Tigers needed Clark for another reason: already he had the reputation for getting into a person’s head. He listened. He gave good advice. He didn’t need to raise his voice; people naturally followed his leadership. Ron planned a simple career trajectory. He would become a rich and successful professional baseball player. And if that didn’t work, he would become a professional bowler. He would be rich and successful, that was the plan. Hot prospect or not, the Tigers weren’t happy when Ron broke his thumb while bowling, twice, part of an unfortunate string of four broken thumbs over two years. His baseball career was over. “I needed a new plan,” Ron says. “And I was good at talking to people.” So he studied to become a social worker who worked at the University of Chicago Hospitals. Somehow these experiences led to a career shift into the banking world—yes, he was good at talking to people. “I was traveling all over the world, riding in stretch limos. I had every reason to think that I deserved it all,” Ron says, but then he tells how his personal trajectory hit bottom, again: “My life fell apart. My business fell apart. My marriage fell apart.” He felt like he didn’t have much left, but he could still talk to people. He became a corporate trainer with Citicorp, Aon Consulting, and T. Rowe Price. And he became a believer in Jesus Christ at 45, followed by a search for the right church. Looking back, Ron recognizes his own immature thinking: The church world needed him because of his successful sports and business experience. But then Ron tells of another home plate collision, one where he didn’t bounce up so fast. He was unprepared for the financial recession that came—“my business plummeted and crashed rather quickly.” Soon after the carolers visited, Ron and Carol Clark began to attend Calvary Baptist. “We started to learn and grow,” Ron says. “I started to understand that I was the lucky one. God wasn’t privileged to have me—I was the privileged one.” Ron started taking seminary classes. He loved the Bible and theology, but recalls some surprises when his corporate outlook bumped into, well, some of the crazy Baptists. “I remember hearing two classmates—much younger than me—discuss their financial plans for planting a new church after seminary.” “I thought, Oh no. We’re in big trouble!” Here Ron was finding an answer to a nagging question. Why would he bother attending seminary? “I had no interest in leading a church; I wasn’t qualified. But maybe I could use my counseling and training background to do something for the church.” 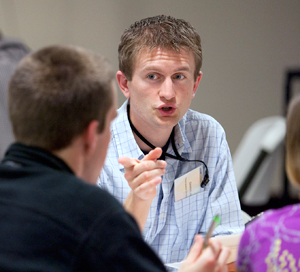 Looking around at the inexperienced seminary students, he borrowed from his old life as a corporate trainer to develop seminars that simulated the later challenges a young pastor would face. “I wanted to give people the experience of church leadership without the necessary pain that real leadership requires,” Ron said, explaining the benefits of his seminar. “Adults tend to learn by doing. Second, we tend to make decisions based on our collective experiences. Simulations help people build experience in areas where they have no experience. Third, simulations are a great way to teach people new ideas.” Ron loved seminary students and wanted to protect them from the up-and-down perils that frequently afflict the young and talented. He could construct the simulations because he knew that life all too well. “You can make big, huge, spectacular mistakes in a simulation and no one gets hurt—except maybe your own ego.” A typical training session would begin with the students grouped into four-person teams and assigned roles: pastor, assistant pastor, youth pastor, and director of women’s ministry. “Welcome! You are part of the leadership team at Apple Valley Baptist Church,” Ron would call out as each team was given a packet of church documents—brochures, bulletins, memos, financial reports. Listening in from the back of the room, guests start to understand why such simulations could be helpful. “Uh, the part about ‘current budget’…does that mean for this whole year?” one student asks. No one laughs—they want to hear Ron’s answer. He then presses forward with his scenario. “Now that you’ve read the church information, what will you plan for your first leadership meeting?” he asks. “Oh—one more thing. Before you start, stop by your mail basket to pick up a few things people have left for you this week.” Here’s where the simulation became interesting. As the “pastors” check their baskets, all sorts of problems become apparent: notes from disgruntled church members, a negative financial report, news of a child injured at church. And Ron has also cooked up a few murky situations that will be hard to understand at first glance. “Pastors, you can decide what to do,” Ron would call out in a deceptively chipper voice. “After reading your mail, you can handle the problem yourself—or bring it up in your next leadership meeting.” Ron quietly offers a bit of play-by-play as the students get to work. “I’m creating a scenario where doing nothing at all seems like a viable strategy. For a while, at least.” The chaos erupts slowly as the groups implement solutions, only to be interrupted by what Ron calls “a few unexpected events.” Throughout the day, the pastors will return to their mail baskets to discover the challenging updates that Ron has planned. Is there a solution to the scenario? “There’s some bad answers,” Ron admits. “And there is no simple, clear right answer.” His real point? “This is a church that needs to hear the gospel all over again.” Ron ends the brief exercise with a two-year forecast about what will happen if the leadership teams continue their chosen direction. A few of the seminary faculty have been observing at the edges of the room. After the session is over, the faculty will mentor the seminarians by assigning personal leadership projects for each student to complete. “Whether at home or away, we make it our aim to please Him,” Ron says near the end, quoting 2 Corinthians 5:9. “If we focus on that, He cares for everything else.” Ron Clark is survived by his wife; his daughter, Emily Williams; step-daughters, Carol Bertola, Teri Foley, Danielle Foley, and Kathleen Smith; a grandson; and two step-grandchildren. His life and ministry were celebrated at a memorial service on Dec. 5 at Calvary Baptist Church. Kevin Mungons is managing editor of the Baptist Bulletin. Darrell Goemaat is director of photography.
Posted in Miscellaneous on December 27, 2013.