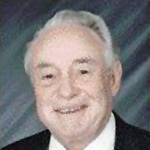 GRAND RAPIDS, Mich.—Joseph Balbach, who pastored several churches in Michigan, died on March 24 at age 92. Joe served his country in the U.S. Navy during World War II and then taught music before graduating from Grand Rapids Baptist Seminary and serving as a pastor in Grand Rapids, Sparta, Saginaw, Sault Ste. Marie, and Kent City. He is survived by his wife, Esther, and their children, Stephen, Carol Goodenough, Benjamin, and Priscilla Spoelstra. A service of praise and thanksgiving will take place Saturday, March 29 at 11 a.m. at Berean Baptist Church in Grand Rapids.
Posted in Miscellaneous on March 31, 2014.