GRANT, Mich.---A global search for his identity led Joe Murray to Jesus and to a life of ministry. At 66, he entered the presence of His Lord on Aug. 4. 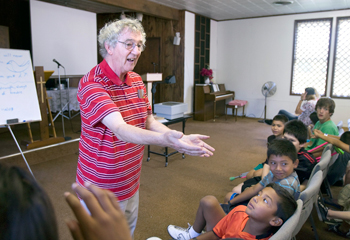 GRANT, Mich.—“If you forget me, you have lost nothing. If you forget Jesus, you have lost everything!” This oft quoted saying of Joe Murray was printed on the front of a bulletin shared with guests who attended his memorial service on Aug. 8. Joe, 66, entered the presence of His Lord Sunday night, Aug. 4, after suffering a heart attack. Joe was born in Dublin, Ireland. Fleeing the horrible environment of Dublin orphanages as a young teenager, Joe began a global search for his identity. His journeys took him to Jerusalem, where he hoped to find more information about the “Jesus” he had heard stories about in the orphanage. Instead, he found only businesses that sought to profit off of Jesus’ fame. Joe worked on an Israeli kibbutz until he was arrested for the possession and use of drugs and subsequently deported. Joe’s international travels took him to several countries in Europe and Asia. He eventually ended up in India in the early 1970s. He reasoned that since his more famous counterparts from Great Britain (the Beatles) had gone to India to explore eastern mysticism, he would try that also. Pursuing religion through the use of drugs, Joe found himself more hopeless than at any other time in his life. It was then that he passed the entrance to a mission hospital in Delhi and saw a sign above the door that quoted Matthew 11:28: “Come to Me, all who are weary, and heavy-laden, and I will give you rest.” Joe entered the doors of the hospital to learn more about what the sign meant and soon came to know the Savior, Jesus Christ. Joe soon joined the Mercy Ships and worked as a cook. While traveling on the Mercy Ships he continued to grow as a Christian as was discipled by those with whom he worked. One significant opportunity he received while serving in Spain was the opportunity to learn Spanish. This opportunity would be used strategically in Joe’s life several years later. Joe eventually married his wife, Mary, in 1984 and they settled in the west Michigan region where they have served God and raised their two children. Joe was quoted in the Baptist Bulletin article “A Story Only God Could Write” (November/December 2012), “We’re conditioned to think that evangelism can only be done by someone who is trained, a seminary graduate. I may not be able to speak with great philosophy and theology, but I can tell others what God has done for me.” It was that conviction that enabled Joe and Mary to have a strategic ministry for many years. They served the Lord for 20 years as missionaries with Released Time Bible Ministries, teaching the Bible during the public school day to children from 15 schools in Grant, Newaygo, Hesperia, Fremont, White Cloud, and Kent City. Joe also served as a deacon at Rice Lake Baptist Church and as a church-planting recruiter with Pastor Pepe Morales at Grace Hispanic Baptist Bible Church in Grant. Joe was strategically used as God’s servant to initiate the formation of the Grace Hispanic Baptist Bible Church. Through his ministry with children in the Released Time Bible Club, he came in contact with several migrant families who had relocated from Mexico to west Michigan in order to work at area farms. Frequently interspersing the familiar words of Job 1:21, “The Lord gave and the Lord has taken away. Blessed be the name of the Lord,” Pastor Pepe Morales recalled at Joe’s memorial service his first introduction to the unique Irish-American who had a heart for Hispanics. Speaking in Spanish with his ministry partner and Joe’s friend Paul Newton serving as translator, Pepe shared, “One day while serving as a pastor in Mexico I received a call from a man who identified himself as someone living in Grant, Mich., who wanted him to come there to help him start a church that would minister to the migrants living there.” Sensing Pepe’s hesitation, Joe then encouraged him to tell his wife, Rosina, about this opportunity and to then pray about it as a couple. He promised that he would phone Pepe again. Several days later Joe indeed called them back, and the Moraleses were soon on their way to minister in Grant. By faith, Joe and Mary secured a $10,000 mortgage to secure a mobile home in which the new pastor and his family could live. The memorial service bulletin included a statement that Joe wrote in his Bible on Nov. 27, 2003: “My goal for life is to become more like Christ each day, and may others benefit from this reality.” Judging by the large groups of people who have gathered for two memorial services and Grace Hispanic’s anniversary service in August, God greatly used Joe’s desire to declare Jesus Christ in his life. Joe is survived by his wife of 29 years, Mary; their children, Abigail Berger and Andrew Murray; four grandchildren; a brother; Desmond Murray; and a sister, Annette Murray. Memorial gifts may be given to Grace Hispanic Baptist Bible Church, P.O. Box 108, Grant, MI 49327. Ken Floyd is the executive ministry director of the Michigan Association of Regular Baptist Churches.
Posted in Miscellaneous on August 15, 2013.