Messengers to the 2010 GARBC Conference have unanimously approved the “Resolution on Revitalizing Biblical Fundamentalism,” summarizing several years of realignment among various Baptist groups that splintered in the wake of the fundamentalist-modernist controversy.

Ninety years ago we gave ourselves a name: fundamentalists.

And 90 years later, we still discuss the implications of the fundamentalist label. Back then, the issues seemed crystal clear: Either you believed the Bible was true, or you didn’t. Simple to articulate and easy to defend, the idea of fundamentalism was expressed as core doctrinal beliefs. Lines were drawn. Positions were staked. Ink was spilt, often.

But language is elastic, meaning is elusive, and sometimes words just wear out.

In an era when the media uses “fundamentalist” to describe suicide bombers and child molesters, is it wise for Baptist churches to continue using the term? Does the label still describe a simple set of historic beliefs, or has it come to mean a complicated system of dress codes and organ music, five simple ideas fractured by six degrees of separation?

If we all believe the same thing, why can’t we get along? 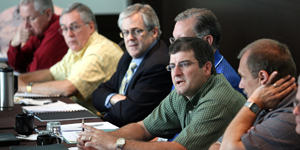 These were the issues that were addressed in the “Resolution on Revitalizing Biblical Fundamentalism” passed unanimously by messengers to the 2010 GARBC Conference on June 22 in Schaumburg, Ill. The resolution attempts to summarize several years of realignment among various Baptist groups that splintered in the 1970s. “While we recognize that the term has suffered at the hands of our critics and society at large, we can think of no other term that adequately reflects the heritage and the position of those who have historically stood for the truth of God’s Word,” the resolution says.

The resolution also calls on GARBC churches to “initiate relationships among fundamentalists where barriers have existed due to misunderstanding or political expedience, in a spirit of kind affection and brotherly love, in honor preferring one another.” While questions of interchurch cooperation have sometimes been difficult for fundamentalists to answer, the resolution asks churches to “establish networks of labor and ministry to meet the challenges of the future, equipping older organizations for the present task where possible, or establishing new ministries where restoration of the old is either impossible or inadvisable.”

“It’s been my desire to see the structures of fundamentalism rebuilt,” Maxwell said to the GARBC Council of Eighteen when the proposed resolution was discussed a day before its vote. “Fundamentalist unity really started to deteriorate in earnest in 1971, when John R. Rice tried to put together the largest meeting of fundamentalists ever, at Cobo Hall in Detroit.”

But Rice ended up inviting people who were not historic fundamentalists, Maxwell says, and as a result, the GARBC and several other groups pulled out. “Since that day I believe the infrastructure of fundamentalism has been fissured,” Maxwell told the council.

In a later interview with the Baptist Bulletin, Maxwell offered another reason for fundamentalist rifts.

“I grew up on a farm. My father owned one bantam rooster, an extremely colorful and gorgeous bird. He was beautiful—and he knew it!”

“Back in the 1970s, fundamentalism became a bantam rooster scratching in the barnyard dirt. We ended up separating over personalities and politics. If you weren’t sufficiently abrasive and in-your-face, you weren’t worthy of being called a fundamentalist,” Maxwell says.

For the past several years, John Greening has been leading the GARBC to patch up some of the fissures caused by the bantam roosters. “There are other independent Baptists who share our convictions. I want to make new friends with them,” Greening said during his annual address as national representative to the conference messengers. “The GARBC is not a closed club. The speakers we have had at our conference last year, this year, and will have next year, are indicative of that.”

One such example is Tim Jordan, pastor of Calvary Baptist Church, Lansdale, Pa. He arrived at the conference a day before he was scheduled to preach, just to hang out and hear the other preachers, meet people, and rub shoulders with ministry leaders he knew from other places. And Tim freely admits his outsider status.

Old-timers called Tim’s dad “Chief,” as in, the chief of a different tribe of Baptist fundamentalists, one that rarely intersected with the GARBC. Now pastoring what was once his father’s church, Tim no longer sees a lot of difference between the two groups.

“So, why is it that we weren’t fellowshipping sooner?” Tim asked before his sermon on Wednesday of the conference, pronouncing his words with at least a little sarcasm—and exasperation. “So . . . what was the difference?”

Jordan made it clear that he is all for the recent change of mood among Baptists, calling it “an enormous ‘Duh.’ ”

“So, yeah, kind of like amazing,” Tim says of the conference week. “It has been a joy to be here and I want to thank all of those involved in allowing me to come.”

And the dress codes, the organ music, the war over Bible translations? Jordan addressed these during an afternoon workshop, making a clear distinction between the baggage of cultural fundamentalism and the ideas of historic fundamentalism.

Jordan stressed the idea of historic fundamentalism as a way of defending the movement’s ideas to younger pastors and seminary students. “They’re not going to do the ‘emperor’s clothes’ thing anymore,” Jordan said of the young leaders, suggesting “they won’t leave if you don’t lie to them!” 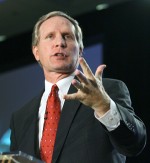 Dan Davey, pastor of Colonial Hills Baptist Church in Virginia Beach, Va., was keynote speaker for the GARBC conference. Like Tim Jordan, Davey leads a congregation that is also not in the GARBC, but he agrees with Tim’s summary of the week, and his definition of fundamentalism.

“I’m a historic fundamentalist and I use that term a lot with my church,” Davey says, feeling comfortable using the term “as long as you read it from my dictionary.” Both he and Jordan credit consistent expository preaching as their main teaching tool. “Our pulpits are a treasure from the Lord,” Davey says. “In our pulpit, we can provide the definition for our terms. We are a Baptist church—here’s what that means. We are historic fundamentalists—here’s what that means.”

Having studied with Richard Clearwaters at Central Baptist Theological Seminary in Minneapolis, Davey arrived in Virginia Beach still calling himself a “biblicist” (Clearwater’s preferred label). But Davey discovered that “biblicist” didn’t work so well for Baptists in the South, what with Pat Robertson just a few miles down the road, famously calling himself . . . a biblicist. So Davey learned to adapt his terminology, patiently teaching his congregation a new dictionary to replace preconceived notions.

Evangelicals who are reading over our shoulder at this point may feel tempted to gloat about the fundamentalist identity crisis—until they recall their own struggles over labels. Having dropped the “neo” tag long ago, evangelicals adopted lifeless adjectives like “ecumenical,” an optimistic word describing their willingness to cooperate with anyone and everyone in mass evangelism. Kevin Bauder once described this misstep as more and more people being saved with less and less gospel.

Haunted by their own unfulfilled promise, some evangelicals began adding adjectives such as “conservative” to clarify their intention to build orthodox, gospel-centered churches. And David Wells, writing in The Courage to Be Protestant, suggested “evangelical” may have outlived its usefulness. “Despite its honorable pedigree, despite its many outstanding leaders both past and some in the present, and despite many genuine and upright believers who think of themselves as evangelical, it may now have to be abandoned,” Wells said of the term.

Organizations such as the Gospel Coalition, Together for the Gospel, and the Alliance of Confessing Evangelicals made enormous strides in distancing themselves from the excesses of their own movement. Carefully articulating a set of doctrinal beliefs, the conservative evangelicals then did a curious thing: they distanced themselves from other Christians who were disorderly in conduct and doctrine.

Over in our neck of the woods, we would call it “separation,” but that term had its baggage, too.

“After 1960, Biblical separation became a badge of honor that replaced Bible exposition in the pulpits,” Davey says, choosing his words carefully. As a younger pastor, Davey was mentored by Ernest Pickering, the author of Biblical Separation: The Struggle for a Pure Church. Davey continues to affirm Pickering’s ideas about so-called “secondary separation” (another label!). But Davey also warns that the right separation idea, wrongly coupled with a misapplied cultural fundamentalism, could well destroy the movement. The key, for Davey, is a return to expository preaching and doctrinal clarity, the sort of pulpit ministry that was consistently modeled during the recent GARBC Conference.

John Greening emphasized the same thing when addressing the conference messengers. “I want doctrinally compatible churches and ministries to feel comfortable and confident enough in the GARBC to say that they have found in us a new friend. We should cultivate relationships for fellowship, but also for ministry initiatives such as publishing, training church leader, global missions, and assisting stateside church planting.”

Meanwhile, James Maxwell is already at work. “Today we are seeing coalitions that would not have been possible 20 years ago,” he told the Council of Eighteen earlier in the week. He should know. One such coalition is the proposed merger between his school, Faith Baptist Bible College, and Bauder’s school, Central Baptist Theological Seminary, Plymouth, Minn. Other signs of growing fundamentalist cooperation include the annual Men for Christ rallies, local efforts to support Baptist social agencies, annual meetings of the Bible Faculty Leadership Summit, and support of Baptist missionaries by churches in several different Baptist fellowships.

“I believe there needs to be a voice for Biblical fundamentalism that is broader than our own fellowship of churches,” James Maxwell told the Council of Eighteen. And despite fundamentalism’s long history of bantam roosters, no one on the council looked particularly surprised.