World News July 14: Supreme Court nominee Elena Kagan continues to draw criticism from Christians and the conservative community in general. Read more about this and other world news. 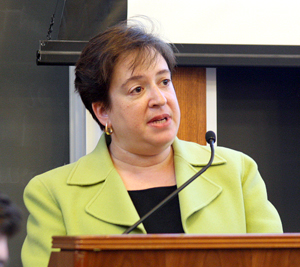 Supreme Court nominee Elena Kagan continues to draw criticism from Christians and the conservative community in general. Drew Zahn in WorldNetDaily said that digging into her past as dean of Harvard Law School reveals a pattern of promoting and praising radical proponents of the homosexual agenda. Kagan had already been widely criticized for barring military recruiters from Harvard’s Office of Career Services in protest over the military’s “Don’t Ask, Don’t Tell” policy, which prohibits open homosexuality in the armed forces. Now Kagan is given a dim view over faculty she hired and promoted at Harvard, who were seen as a cast of radicals so controversial, even Kagan joked in introducing one that that they are “the kind of professor[s] for whom tenure was created.” Among those welcomed to teach at Harvard were openly gay Professor William B. Rubenstein, a former litigator for the ACLU; radical feminist Catherine MacKinnon, who declared that all sex is an act of violence perpetrated against a woman; and Janet Halley, who referred to herself as a “gay man.” Meanwhile, Rep. Ted Poe (R.-Tex.) noted in Human Events that Kagan “has never been a judge. She’s never seen a courtroom from the bench. She’s never had a judge’s responsibilities. Elena Kagan has never instructed a jury or ruled on a point of law—any point of law. She’s never tried a criminal case, a civil case, or even a traffic case. She has not decided even one constitutional issue. We don’t know whether or not she believes the Constitution is the foundation of American law or whether she thinks, like many, the Constitution constantly changes based upon the personal opinions of Supreme Court justices.”