After a career full of deadlines, Norm Olson, retired senior editor of the Baptist Bulletin, was settling into a quiet routine with his family and friends. Norm died on May 20 after suffering a sudden heart ailment. He was 69. 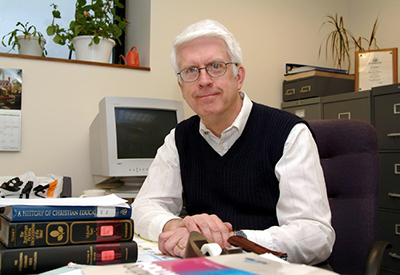 by Kevin Mungons and Melissa Meyer

Norm Olson liked to finish projects before they were due. A few weeks earlier he had sent his monthly Baptist Bulletin column to the editors. And he had chosen Sunday’s hymns ahead of time, practicing them at home on his antique reed organ. He was ready. But on Saturday morning he wasn’t feeling so well—a sharp pain between his shoulder blades—prompting a quick drive to the emergency room.

After his 2011 retirement as senior editor of the Baptist Bulletin, Norm kept writing his “Q and A” column, a popular monthly feature. He devoted more time to his church, Emmanuel Baptist of Warrenville in Naperville, Illinois, where he served as a deacon, Sunday School teacher, and organist. And like all retired editors, Norm had a hard time turning off his brain, so he still helped Pastor Dale Williams with proofreading (“Bulletin mistakes drove him nuts,” Dale says). After a career full of deadlines, Norm was settling into a quiet routine with his family and friends, all of whom were shocked by the news.

Norman A. Olson, senior editor of the Baptist Bulletin, died on May 20, 2017, after suffering a sudden heart ailment. He was 69.

When the congregation gathered the next morning, the organ was draped in black. Somehow everyone made it through the first hymn, the one Norm had picked. As an ardent hymnal collector and student of Baptist history, his song choices could be obscure, or at least challenging to anyone who expected a “Top 40” approach to worship.

Majestic sweetness sits enthroned
Upon the Savior’s brow;
His head with radiant glories crowned,
His lips with grace overflow.

On any given Sunday, his service order made sense once the pastor started preaching. “He knew a gazillion hymns and could always find a great hymn and appropriate music to fit my sermons,” Dale says, adding that Norm was no fan of skipping to the last stanza. On Sunday, when the weeping congregation sang the entire hymn, no one needed to explain why.

He saw me plunged in deep distress,
And flew to my relief;
For me He bore the shameful cross,
And carried all my grief.

Norm Olson grew up in the southern Minnesota community of Fairmont, supplying him with a lifetime of small-town stories, told and retold to family members. Like Garrison Keillor’s mythic Lake Wobegon, Fairmont was a place “where all the women are strong, all the men are good-looking, and all the children are above average.” Proud of his 100 percent Norwegian heritage, Norm was a card-carrying member of the Sons of Norway Polar Star Lodge.

After graduating from Fairmont High School, Norm earned earn a bachelor’s degree in 1969 from nearby Pillsbury Baptist Bible College, where he worked as the librarian. That experience led him to Anaheim, California, where he taught in a Christian high school and brought the school library up to accreditation standards. While in California, he earned a master’s degree in Christian Education from Talbot Theological Seminary in 1974.

In 1977 he became assistant editor of Good News Broadcaster, a magazine produced by Back to the Bible Ministries in Lincoln, Nebraska. He worked closely with the radio host, Warren Wiersbe, to rebrand the magazine as Confident Living, and soon was promoted to managing editor. Norm met and married his beloved wife, Betsy Schmidt, who had been born and raised in Ecuador, South America, as the daughter of missionaries; Norm and Betsy became active in Temple Baptist Church in Lincoln. 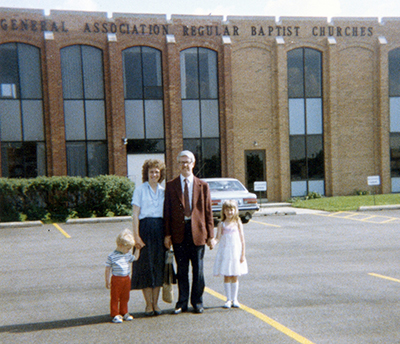 When the GARBC’s Vernon Miller learned about this magazine editor living out in Nebraska, one with a seminary degree and membership in a GARBC church, the recruitment campaign began in earnest. In 1988 Norm accepted the offer to become managing editor of the Baptist Bulletin. Norm and Betsy moved to suburban Chicago and established a new home, where they raised four children: Lisa, Seth, Julianna, and Jeremy.

Right away Norm pitched an idea for a new magazine column, something he called “Exploring God’s Word.” At Back to the Bible he had written a monthly question-and-answer column that proved popular with readers, so he suggested that a similar approach might work in the Baptist Bulletin. When the column made its debut in September 1988, Norm asked the readers to avoid questions they could easily look up somewhere else. Instead, he wanted to address the hard questions, the practical concerns requiring solid, Biblical answers. Still, he told readers he would avoid questions “that do nothing more than stir up strife or generate needless controversy within the Fellowship.” His approach was famously effective. The “Q and A” archive remains an ongoing resource for pastors, Sunday School teachers, and Bible study leaders.

His final question (“Is Fasting for Today?”) will run in the July/August Baptist Bulletin, making a total of 376 answered questions during 29 years of columns. Combined with the 11 years he wrote a similar column for Confident Living magazine, that makes for 40 years of thoughtful questions and Biblical answers.

“Norm was a thoughtful man, in both senses of the word,” recalls Jonita Barram, who began working on the editorial staff of Regular Baptist Press the same year as Norm. “He was meditative, taking time to think through what he would say. And though he was quiet and shy, he cared about others, desiring to help in any way he could.”

Pastor Dale Williams says Norm was the kind of guy who did a lot things no one noticed, calling him “a man of integrity who loved his wife, loved his family, and loved God’s Word.”

During his 29 years of service at Regular Baptist Press, Norm would assume several more roles: book editor, theological editor for Sunday School lessons, and archivist for the GARBC’s growing collection of Baptist history resources. His experiences with various Baptist tribes and his wide network of friends gave him a vast institutional memory. Inside the GARBC offices, Norm became the answer man for all sorts of questions.

But the toughest question of all would be asked on the Saturday afternoon of his death, when family and colleagues and church members were all voicing the same word: Why?

As it turns out, Norm had answered that question already, back in November 1989. A reader was perplexed by Ephesians 1:11, where God “works all things according to the counsel of His will.” But what about those tragic deaths, the reader asked, when a believer is killed in a plane crash or dies of cancer. How can that be God’s will?

“We know that God is interested in every detail of our lives,” Norm wrote. “And the Christian who is committed to living for the Lord can entrust these details—even the ‘tragic’ ones—to the Heavenly Father. . . . We can know that God does (or allows) all things in His perfect wisdom and love when it comes to the believer in right relationship with Him.”

So the next morning his church gathered for Norm Olson’s last song, “Majestic Sweetness Sits Enthroned.” They sang every stanza, right to the end, and then it somehow it all made sense.

To Him I owe my life and breath,
And all the joys I have;
He makes me triumph over death
And saves me from the grave.

‘In quietness and confidence’

The wonderful promise found in Isaiah 30:15 has a similar dignity and reassurance to the popular British saying, “Stay calm and carry on.” Isaiah records God’s call to the rebellious house of Jacob: “In returning and rest you shall be saved; in quietness and confidence shall be your strength.” Those words, “quietness and confidence,” are a dramatic contrast to the frenetic pace and uncertainty of the culture that surrounds us.

The descriptors of quietness and confidence describe the godly manner that I observed in my colleague of many years, Norm Olson. His quietness of manner brought a settled and calming maturity to his communication, whether written or spoken. His love of books and libraries was exhibited by a twinkle in his eye and perhaps a chuckle when he discovered new information. In all of life, Norm manifested a confidence that had nothing to do with a cocky self-assurance, but rather with a deep resting in the foundation of the character and knowledge of his Lord and Savior Jesus Christ and the Word of God. I hold the memory of Norm in the highest regard. My sympathies are extended to his wife, Betsy, and their family.