Talents For Christ propels students to excellence in their service for Christ. 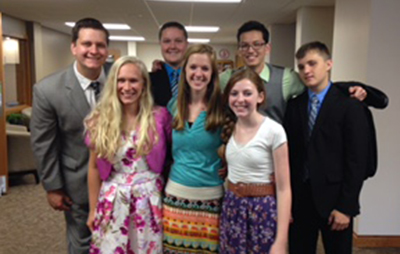 ANKENY, Iowa—Two adults, seven teens, one van, and a five-day tour. Sounds hectic! But for Tim Capon, representative of the Iowa Association of Regular Baptist Churches, and his wife, Sandy, it was “a truly enriching time” that they won’t forget anytime soon.

The seven teens who traveled with them were first- and second-place winners in the IARBC Talents For Christ contest, which took place April 11 on the campus of Faith Baptist Bible College and Theological Seminary.

Capon describes the seven students as spiritually minded, polite, respectful, and a joy to be with. “They reflected Christ,” he says.

The five-day tour took the group to five of their seven home churches. Capon says, “God was truly glorified as they used their talents for Christ, and represented Him well throughout the tour.”

Pastor Scott Onofrio of Faith Baptist in Mason City—one of the churches on the tour—sees TFC as a ministry that puts Hebrews 10:24 into action: “Let us consider how we may spur one another on toward love and good deeds.” He also says that JP Ryal’s participation in TFC was a source of joy for the congregation. “We all rejoiced when ‘one of us’ made a difference for Christ.” JP’s involvement in TFC and the Iowa tour is a model for the entire church body to use their talents for Christ, says Pastor Onofrio.

Pastor Onofrio describes Talents For Christ as an intentional ministry that helps churches annually push students to a level of excellence in Christian service. The GARBC invites churches to take advantage of TFC in 2016, encouraging their students to participate in the state and national TFC contests.