Faith Baptist Church has called David Totman as its new pastor. He and his wife, Anora, have been missionaries in Africa and Hungary since 2003. 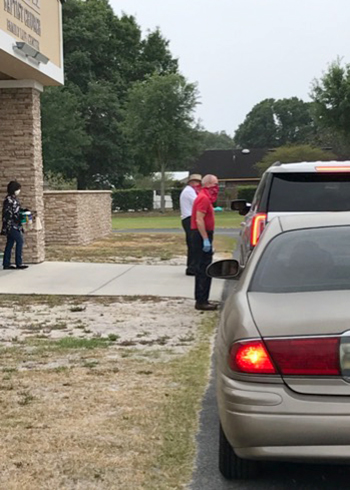 WINTER HAVEN, Fla.—Faith Baptist Church has called David Totman as its new pastor. He and his wife, Anora, have been missionaries in Africa and Hungary since 2003. The Totmans, members of the church since 1998, were the first missionaries the church sent overseas through its missions program called Faith’s 100. He will now be returning to the church as pastor, succeeding the pastorate of Nathan O. Osborne III.

Osborne announced his retirement in September 2019, with his plan being to step away from his role in June 2020. He has been pastor of the church for 25 years. The church honored him and his wife, Jill, for that milestone on March 15.

In a drive-in vote April 5, following social distancing guidelines, the church voted to call Totman as pastor. He will begin ministering at the church mid-July.

Totman says he is thrilled to return to the church. “God’s leading never ceases to amaze us, and we’re excited for this new turn in the journey,” he says. “It is a corner we did not expect or ever imagine happening, but we are returning with a great sense of anticipation and excitement over what God has in store.

“We have been serving as Faith Baptist members for over two decades, but most of that time has been in long-distance partnership while we have been overseas. We’re excited now to be able to work, in much closer physical proximity, to dear friends, and we’re looking forward to developing new relationships with those who have joined our church since we last left.”

Understanding the Call to Ministry

The call to ministry is a realization that God is directing you into vocational ministry. This realization is accompanied by your own desire. And it ...more

At Faith Baptist Church, a fish dinner not only feeds the church family and community but also brings in funds for the church's food ...more

"Pray for the Coup to End," Says Ministry Leader in Myanmar

"Our city, Yangon, has now become a war zone," says Victor Vula of Myanmar. "Pray for the coup to ...more

Leaders of Regular Baptist state associations met online March 15 to brainstorm ways their associations and the GARBC can work together to help churches and ...more